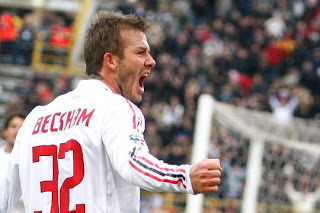 Backlash. Reverse Beckhamania. Beckham haters. Call it what you want. His time in MLS is almost up. After scoring two great goals for Italian powerhouse AC Milan and hinting at a potential exit from MLS, things look bleaker for the league. I like to think about how comments such as "he only plays well when there's good players around him" actually do make sense in this case. Around him are Kaka, Pirlo, Gattuso, Pato, Seedorf, Ronaldinho... the list goes on. Who does he have in the Galaxy? Besides Donovan and maybe Lewis, not nearly enough (no bashing intended, I love my American players... just being honest).
Looking at comments on SBI's story about his latest Milan exploits, that is, the general commentary by SBI readers, one can gain a great perspective on what American soccer fans really do think about the aging superstar. A good deal of "I'm tired of this story," "this is great for the league," "I'm so glad he's leaving," and then there's the fact that readers pointed this out: CNN's front page reads "Beckham leaving US league already?"
Word is also out that the league would be selling him for $11 million. I say much more if they want to get a final whoora from his stay here.
Here comes the reality check... Is the MLS a joke to non-believers here and abroad? I hope not. Then again I have to remind myself that I started watching more games in the 2007 season when his move to the US was imminent. I got entranced in the style of play and the promise of new, exciting stars to come. Becks gave way to the "Designated Player Rule," which allowed teams to have one star beyond their salary cap. In came Juan Pablo Angel (excellent acquisition for NY although not a factor in ticket sales), Claudio Lopez (downgraded from DP), Marcelo Gallardo (wants out and should be leaving this Spring), Denilson (complete bust for Dallas), Blanco (best overall and much more as a player than Becks) and Ljundberg (we'll see how he does this season). I will keep a cool mind and be objective about this. Designated players abound and in this time of economic hardship maybe it would be a good idea to think small for a little while. Instead, let's dream of some other players that may come our way--Figo, Henry, Michael Owen, Jared Borgetti, Ronaldo, even Ronaldinho eventually. These superstars dream of having a quieter life as their careers wind down... and what better place than in a league that doesn't take up headlines except for when one megastar enters/leaves the stage. Beckham, as Timberlake cheesily put it, made Americans care "that much more" about soccer.
A sad end indeed.
In the meantime, let's enjoy his latest, typical, "Bend it like Beckham" moment:

Always nice to get feedback ;)

He will be much happier at Milan. Good riddance to so much hype and so little substance.