Kaka: For love or money 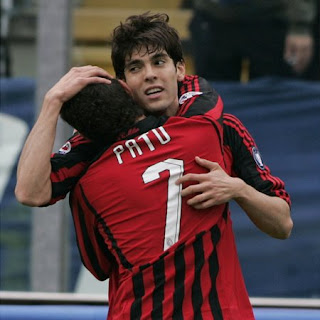 The record is set. Sort of. Maybe there's still some time for Kaka and AC Milan to consider the consequences of what could be a record-breaking $150 million transfer to Abu Dhabi-owned Manchester City. There are many things to consider with this turn of events, if it occurs. Opponents of this move include Beckham and AC Milan teammates (Pato, Ronaldinho), the Milan fans, and even Hull City boss, who remarks that this is not football when a team can buy any player it likes in order to win. Even then, however, we can look at other sports like baseball (Yankees, Red Sox, etc) and Abromovich's own star-studded Chelsea that have not shied away from admiting they have bought the best players. MLS is not alone (Beckham, Blanco, Gallardo), even if the teams don't really pan out as winners. Right now, Man City boasts Robinho, Elano, Jo, Wright-Phillips and they are looking all over the world for more stars. Who can stop them if they have bottomless pockets in this present age when capitalism has failed?... unless you control the flow of oil. And yet that's the other story line to follow here. Italy is in economic crisis like the rest of the world and the city of Milan and the club are also looking for ways out. It is high ranking officials, ultimately, that may decide the fate of the former Fifa player of the year (2007). Also to consider is the fact that Kaka leaving may pave the way for a permanent move for Beckham, even if Milan aren't looking to spend the cash.
Surely, this is a test of mind over matter, money versus heart, and pure capitalism may have the upper hand.
Posted by R. Mera Velásquez at 4:50 PM

The Marlins aren't a buyer of championships, in fact they have had to sell off their expensive young talent after both of their World Series' wins. If you want to use another example from baseball, the Red Sox would probably be the best choice. No one spends like the Yankees, though.

Word. I meant the Marlins that won the World Series and then sold their entire team. It was a while back.