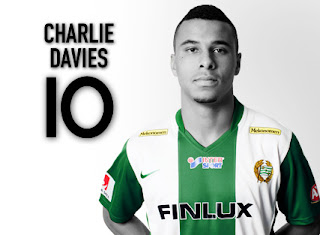 Whether just playing friendlies during the winter break (northern parts of Scandinavia lose sunlight completely) or sharing players, Scandinavian countries have become intimately tied to American soccer. Yesterday's friendly at Los Angeles' HDC between the US and Sweden proved to be an important test for the youngsters and some of the veterans from both domestic leagues. Sacha Kljestan showed how he's one of the top players in the US with a superb hat trick that will undoubtedly catapult him to a transfer to Scotish side Celtic.
Denmark is another country that likes to take winter breaks in the US and play friendlies outside of FIFA. But there is another side to the Scandinavian love affair with US soccer. . .
A good portion of youngsters, be it recent college graduates or standout MLSers, end up in leagues from Denmark to Sweden to Norway. Why is this? Partly because these players will undoubtedly earn more at these modest teams than they would in the MLS. Leagues such as Sweeden's can also act as a window for certain players to begin to make their mark in Europe. One such player is Charlie Davies: he has been playing with Hammarby since 2007, scoring 19 goals. Other players included in this list are former New England defender standout Michael Parkhurst who recently signed with Nordsjaelland, 2009 College draft top pick Marcus Tracy (Aalborg, Denmark), Danny Califf (Midtjylland, Denmark), Troy Perkins (Vålerenga, Norway), Ryan Raybuld (Gefle, Norway), Clarence Goodson (IK Start, Norway) Lee Nguyen and Will John (Randers, Denmark), Tally Hall (Esberg, Denmark), plus a few others throughout Scandinavia.
Many out there argue that Scandinavian leagues turn out to be "black holes" for our players. I can't say I agree. There's more of a chance to grow in Europe than there is in a USL side or MLS bench. In the end, if growing in soccer knowledge isn't enough then it is the financial side that can push our players to these Nordic leagues. Who can argue with that? In the meantime, Scandinavia, send us some of your players this way. Ljungberg is a nice start.
Posted by R. Mera Velásquez at 12:47 PM

Do you go to the NC St games often? I know three teams from the ACC made the NCAA semis this year. Seems like there is a lot of young talent in the league.

Not yet. The college soccer rules upset me. One of which actually gives timeouts during the game!

Aren't the substitution rules a bit more relaxed as well?

I'm not sure about substitution rules. I tend to cringe when I watch college games. It's a pity because I know these are excellent players.