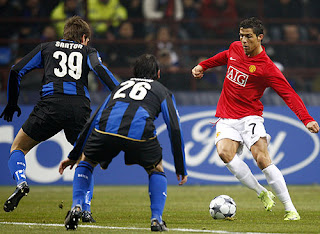 After watching nearly all the Champions League games this week (at least pieces of games here and there) thanks in part to ESPN360.com--now free on college campuses--it once again became apparent how dominant the English Premier League truly is. Indeed, not Roma, Inter, Juventus or even mighty Real Madrid could get through the weakest of links--Arsenal, which currently sits outside of the Champions zone in the EPL table. Myself, along with ESPN's Tommy Smyth and others were wrong in our premature conclusion that "The Special One," a.k.a Jose Mourinho could get his Inter through the fortress that is Man U's Old Trafford. Vidic scored early and Cristiano Ronaldo finished the Serie A side with the second goal to end the match at 2-0. I also read that Mourinho apparently punched a fan after the game. Typical.

So what makes the EPL so good? To start, infrastructure. Competition formats are clearly defined, as are each of the lower divisions, their ascending and descending rules, sponsorship and ownership. We're looking at several American owners in the league (Liverpool, Aston Villa, Derby County), Russian tycoons (Abromovich and Chelsea) and even superfunded Man City (Dubai group). Added to this is perhaps the greatest stock of coaches that have staying power (Ferguson, Wenger, Benitez) where in other leagues they are ousted within one or two seasons, i.e. Capello, Koeman. These coaches are given the benefit of the doubt even after coming in as fourth overall (Arsenal). Stability makes for good teams in my humble view... just look at some of the NFL teams. 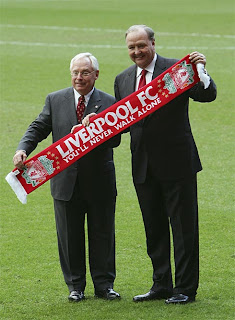 Then there are the players. More teams in the EPL are able to afford both the greatest and the largest quantity of soccer players on the planet. Cristiano Ronaldo, Robinho, Rooney, Fabreagas, Torres, Drogba, Ballack, and the list goes on. And the smaller teams like Wigan can afford some of the top players from minor countries as is the case with Valencia (Ecuador) and Figueroa (Honduras).

Lastly and perhaps most importantly are the fans. They always show up. Be it for Championship games between Cardiff and Reading, F.A. and Carling Cup games with teams like Leeds and Coventry, and all matches in between. Perhaps it is the higher income in the island nation but you can't deny a British fan's devotion. Case in point--Serie A games are often empty in the stands or only partially full even with Beckham at AC Milan. Such is also the case with Copa del Rey in Spain. Well, there is my opinion. Perhaps other leagues around Europe and the world should emulate the various aspects that make the English football game so special.
Posted by R. Mera Velásquez at 8:43 AM

Thanks Robert, enjoyed the column very much. I can vouch for the attendance, I went to a Championship League game at QPR a couple of years back and the stands were full and jumping even for a team that had fallen from its days as a premiership side.