The comeback kids: El Salvador - US 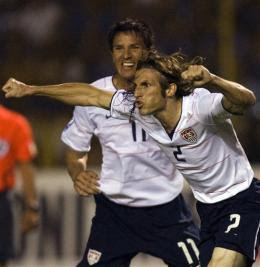 No Gooch (Onyewu), no Tim Howard in goal. I mentioned in my previous post that this indeed had the makes of a hard game for the US. It's hard to imagine an important team having a hard time against so-called "minnows," i.e. El Salvador. But such was the case. Potentially it was the noise from the boisterous fans, luck of the draw, good Salvadoran side, or bad football.

Bradley's team didn't gel today. The offense was uninspired for a good portion of the game. But it didn't start out that way. Even in the depths of the Cuscatlan, the considerable might of the US national team weighed heavily on the hearts and minds of players and fans alike. El Salvador scores first, early and painfully. It was a freak play partially blamed on the noise and an alteration of the US backline (Califf for Onyewu, Guzan for Howard). Point is USA was losing to El Salvador for the first time in 16 years.

Things went from bad to worse. Pearce was getting lost and Califf confused. Errant passes from Beasley, Kljestan, Bradley and Dempsey didn't help. Donovan and Ching were trying to get it done up front but they received little service from midfield. Indeed, Ching repeatedly found himself playing defense.

A change was needed. Bradley Sr answered with a surprise shift from 4-2-1-1 to an interchangeable 3-4-3 with Beasley as the "enganche," the polyfunctional position he excels at. In comes Altidore for a quiet Pearce. Things didn't pay off automatically, however. El Salvador answered Bradley's change with a beautiful second goal right after the second substitution (Torres for Kljestan). Hejduk was outdone by an appreciably shorter Castillo that headed the ball beyond Guzan's reach. Howard was missing but I'm not sure he would have done much better against the two goals scored.

The subs and change in scheme turned things around from the Americans. Torres was considerably more efficient than Kljestan in the midfield (again, playing time may be a factor here). The ball was solely in the American's possession. Soon it was Jozy taking care of business, using his size and strength to bring the score to 1-2. Hejduk, often clumsily beaten by Salvadorans in the first half, forcibly headed the tying goal 2 minutes to stoppage time. The man was inspired, but sometimes his aggressiveness with the ball and offensive play led to important attacks by the Cuscatlecos.

In the end this was a lesson in humility. No one can be too big for history. Tonight, the considerable differences in quality between these two sides did not decide the outcome of the game. The US had to win back its style of play to come away with a tie that felt painfully as a loss. USA still leads the table with 4 points after Mexico beat Costa Rica and Honduras and Trinidad shared points. Next up is Trinidad in Nashville--a must win.

Could be you are being a little bit harsh on your teams, to come back in a hostile stadium from a 2-0 deficit with twenty minutes to play is a pretty impressive accomplishment even if against a weaker side, especially since (as you mentioned) we were not able to dress a couple of our integral players. We will get the three in Nashville and be headed in the right direction.