Becks and his final move 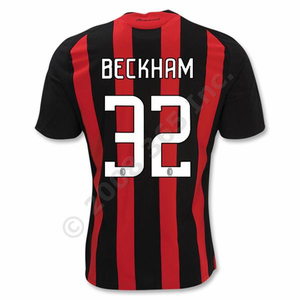 It's true. MLS will never be the same because of Beckham. Now comes word that Becks will be splitting time between AC Milan and the LA Galaxy in a time-share type deal that includes a friendly between the two teams (that part I had predicted long ago). I think this isn't that bad a deal for either team(s) or player. Clearly, Beckham wants out of MLS so that he has a chance at being with England for 2010. Clearly this would not have been the case if his form had not faltered in 2007. Clearly, Steve McClaren's decision to part ways with the talented midfielder when he took the England manager position in 2006 meant a possible early retirement from international duty. 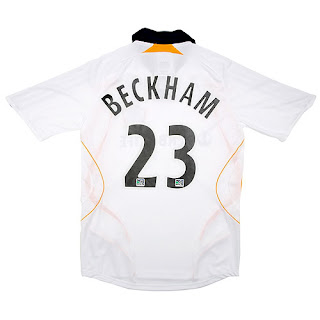 And yet, through it all, it seems that MLS and the US actually revived the former England captain's career (this is something I read in ESPN magazine of all places). He regained a spot in the England squad after McClaren's results in Euro qualifying started to fall apart. Capello always had a soft spot for Becks (much like Eriksson) and he decided to keep "Golden Balls" around in what I must admit is increasingly looking like an overage England national team. Beckham drew millions of fans, sold millions of jerseys (myself included), drew media attention to the league, opened the door for Blanco/Angel/Ljungberg/Lopez/Schellotto, and finally drew attention from another major team and league--AC Milan of Italy's Serie A. Beckham became only the fifth Englishman to win 100 caps when Capello recalled him to the England squad by Capello for the friendly against France on 26 March 2008.

S0 Beckham will now play the remainder of the 2009 Italy season with Milan (ending in June) and will return for the Galaxy beggining July 15th when the transfer window opens. A return to Milan on a free transfer in the winter 2010 window is already slated to occur. Let it be known that the man funded part of the deal and that half of his MLS salary $200K will not go against the Galaxy for the season, thus leaving space for the LA team to play around with their roster for the first half of the upcoming MLS season. I leave you with two plots from 2008 attendance analysis highlighting the man's effect on league numbers: 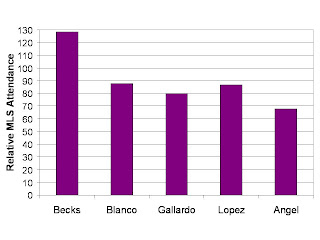 Plot b) A comparison of actual attendance numbers with MLS's other great designated player, Blanco: 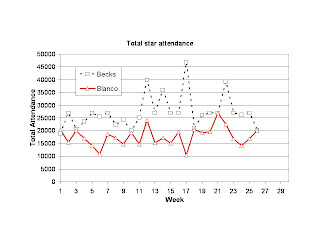 Thanks for the link, love what you did there. Please show me what I need do to reciprocate. Now if I could only figure how to turn on this computer.....
As far as Becks goes, he is an example of how the media's fascination with celebrity can blow a player out of all proportion to his talent. A pretty face and a devastating free kick, but no where near the top player even in the MLS.

Impressive domination by the English sides in the Champions League so far - why do they seem to have jumped ahead of the other leagues the last couple years? Do they pay the highest salary and thus get the best talent (at least the top teams)?

Yes, they are quite unbeatable at this point. Only Barca can get through them. Even Tommy Smyth got it wrong predicting the "Special One" would prevail over Sir Alex!
The EPL has too much money, all the players and quite the infrastructure. Even the smaller second and third tier teams (Reading, Cardif, Leeds, etc.) can be quite impressive in terms of organization.