Welcome to your weekly fix of MLS attendance. A couple of notes: Why did MLS go ahead with its schedule (2nd week!) knowing full well that there would be important international matches to be played? A good number of national-teamers were out and not just US players but all of Concacaf, Conmebol, UEFA, CAF and AFC! Why not start a week early, do a mid-week run of games and then a week off for international play?

So there you have it. That's why attendance this week was less than stellar. Not even strong markets like DC and Columbus fared well. DCU hasn't created much buzz this off-season so a starting crowd of 15000+ on an international fixture is not bad. Columbus could have done better than 14686 against bitter rivals Toronto but at least it was a respectable crowd. What's not respectable? Dallas. Less than 7000 souls were present for another sub par performance from the Hoops. What does Hyndman need to do to get the team rolling? I'm not even worried about the crowds here.

Seattle saves all. An over-MLS-limit crowd was present to witness Fredy Montero light things up against title contenders Real Salt Lake. Next week comes Toronto and RSL's season debut. Numbers should be coming up. In the meantime, have a look at the pie graphs below. 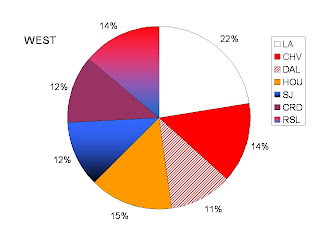 One for last season (Beckham's Galaxy crowds) and.... 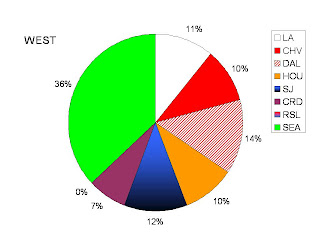 one for this season so far (Sounders green all over).
Posted by R. Mera Velásquez at 10:25 PM

Keep up the comparisons from last year as much as possible, if you ask me. Seattle will no doubt raise the average if this continues.