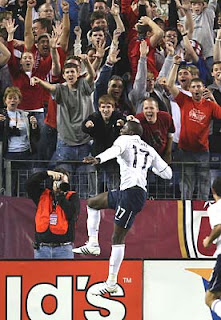 Redemption. USA 3 - Trinidad and Tobago 0. The US bounced back from an unsatisfactory performance at the Estadio Cuscatlan in El Salvador with a "goleada" to quench fans' thirst for success. What a night for Jozy [Altidore]! Three goals, some spectacular, some because he can score. Clearly, Villareal noticed this kid was special when they decided to invest $10 million into his future. It's too bad Xerez (current on-loan club) management does not agree and keeps the youngster away from the pitch.

Elsewhere on the field that succeeded today was Grankie Hejduk. I think Cherundulo will have quite a battle if he wants to be the number one at right back. Beasley on the left flank was a great move although I'm concerned with the player's frailty at points (frequent injuries). I think of him as a skinny Roberto Carlos. He was thoroughly tested today and answered well against the T&T attacks. Mastroeni on the field as a holding midfielder was an interesting choice. He had his touches but remained quiet. That's a holding midfielder's job. Edu has similar qualities and is possibly the future in this position but for now Mastroeni was done a good job. Donovan was his usual brilliant self in the midfield with Ching maintaining possession of the ball right behind Jozy.

Onyewu and Howard's return were welcome sights. Bradley and Dempsey had great games, winning balls and distributing play. Kljestan, in the short few minutes he had was surprisingly effective against the type of play displayed by T&T (more European). This may be something to note for the future, especially keeping in mind that he was great against Sweden with his hat trick earlier this year. Torres brought in good energy but his effect wasn't as strong as with El Salvador.

Elsewhere around the world were incredible upsets, tearful ties and important wins for established teams. Upsets: Bolivia trashed Argentina 6-1. As I had remarked to a friend of mine, a "best in the world" side does not lose to minnows. Spain has been repeatedly taking care of things. Argentina, Italy, Brazil, France and Mexico seem to trip up here and there. Maradona should be crying as he was that fateful night in Rome on a midsummer night in 1990 when his team lost to Germany in that World Cup's final.

Another important "upset" was Honduras total domination of Mexico. Sven Goran Eriksson will undoubtedly be shown the door pretty soon. Mexicans have very little patience and short attention span. Among upsets that were more like tearful ties were Uruguay and Chile's 0-0, Italy and Ireland's 1-1 and an unfortunate 1-1 between Ecuador and Paraguay in Quito. As I had remarked earlier, this Ecuador side will not make it to 2010. It is true what the Ecuador media had mentioned... Ecuador has great attackers in Benitez and Caicedo but it lacks true goal-scorers like Agustin Delgado. This quite possibly holds true for Mexico, France and Italy as well.

Other teams around the world cemented their steps in next year's ecumenical occasion: Australia, Spain, England, Germany, Holland are some of the big names on the list. There are so many stories here that I can't do justice to. 80 matches, by the way, in the last 5 days. And the band plays on.

Yeah, you missed the San Marino match - don't worry though, I covered it on my blog.