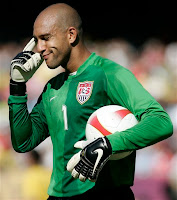 Simply amazing. Howard was the FA Cup here for Everton over the weekend. Two penalties stopped against none other than Dimitar Berbatov and Rio Ferdinand. Clearly, we have an awesome superstar here, not to mention the fact that he's a former Man U keeper as well. It's no fluke that the back line of the US national team just seems to gel better when he'd directing things from his goal.

Meola. Keller. Friedel. Hannehman. Perkins. Guzan. The list goes on. Outstanding US goalkeepers making their mark here and abroad. They have the most impressive resumes of any US player. Why is that? I venture a couple of educated guesses:

1. Americans love upper body-oriented sports: Baseball, Basketball, Football. All rely on arms mostly although speed and motion are important as well. This fact allows for a seamless transition into soccer. Much less knowledge of the sport is necessary. Saves, reflexes, elasticity are important. Think diving for a football/basketball. I venture this notion also because my wife was a goalie back in the day. She also played basketball and rugby. Seamless transition, right?

2. Development. Around the world, goalkeeping is often an afterthought. You need scorers and playmakers first, defense second, and if you have a chance maybe a goalkeeper too. That's the way it goes usually. Just facts. But here in the US all facets are taking seriously, including goalkeepers. It is part of the developmental process and starts with boys and girls at the youngest of levels.

That's my rant for today. Feel free to share your thoughts. Meantime, a few seconds with Howard, stopping mighty Manchester United, and reaching for glory in the FA Cup.

Good for Everton as well, they have been on the brink of being one of the elite teams for years but have failed to have the big breakthrough - hopefully they can win the final.