I may take a couple of days to post these numbers but they're usually worth it, right? Pretty pictures are usually more intuitive than just random numbers and facts. With that in mind, I'd like to concentrate on this week's numbers. With both TFC and Seattle playing at home, you would expect big numbers. TFC never disappoints and Seattle got its money's worth with Ljundberg and Keller scoring big both on the pitch and in the stands. 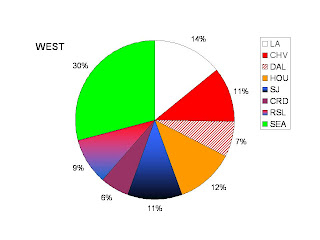 As it stands, if you took Seattle and Toronto away, league mean attendance would be scarcely over 12,000. The two teams alone bring the number above 14,000. Columbus and DCU are showing signs of a comeback in attendance terms. Less can be said about the reigning champ's success on the pitch. But it's early and plenty of dreaming to be done. Schellotto may yet show his considerable muscle and this team has a great base to work with. 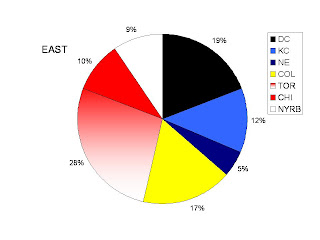 Qwest field is no Bernabeu and San Jose is no Chelsea, but the stadium boils over with excitement from the crowd nonetheless. More on Champions League after tomorrow's affair. One more check at attendance. On the right is a pie chart of attendance for the western conference. On the left is the same for the east. Clearly, the two attendance leaders overshadow other teams. No Beckham means no huge white chunk (denoting Galaxy) of the pie.
Posted by R. Mera Velásquez at 10:24 PM

Two good sites to see this week was DC bouncing back and LA's number was over 20,000 according to the MLS scoresheet.

If DC could pull a stadium that would be sweet to see.