An ode to SuperClasicos: Chivas vs Galaxy 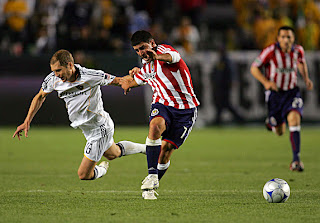 They exist all around the world. In-town rivalries are unparalleled in their excitement and passion regardless of the sport, current level of play or rivals, stars in each team, or coaches. From Man U - Man City to Real Madrid vs Atletico Madrid, Inter vs AC Milan, Boca vs River, Chivas vs Atlas, Rangers vs Celtic, Emelec vs Barcelona, Mets - Yankees, Jets - Giants, it doesn't matter. Now MLS has its own in-town game: Chivas USA and LA Galaxy. And what a rivalry it has become.

Indeed, yesterday's match wasn't unprecedented at all. 3 red cards, several yellows, no goals and lots of passion. A Beckham-less Galaxy is looking lethargic and anemic at points and no Berhalter, Saneh or Lewis (all national team vets, and old) can save Bruce Arena's side. This team is looking more like the Mexican national team. Chivas, on the other hand, has a splendid attack, imposing defense and is unbeaten this season. Preki (also a national team veteran) has done wonders as coach of the mid-decade expansion side.

Donovan looked a bit lost without much service from the midfield. Gordon knew the importance of the match and acted like it. This may be why he got ejected for two infractions... dissent of the ref and a random foul behind cameras a-la-Zidane. But that's what these games are about. Nagamura (Chivas) felt it too and got unjustly ejected after a soft yellow for a foul against Donovan. Berhalter also tackled Eskandarian in midfield after a bad bounce nearly left the former DC man one-on-one versus Ricketts. And Ricketts came up big as a solid 'keeper. Something sorely needed after Cronin's debacle last season. 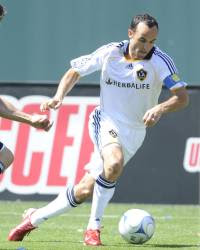 And the commentators also reacted well to the superclasico atmosphere. Lalas felt for his former team (manager of Galaxy during the Becks circus) and fellow one-time teammate John Harkes also drowned in the atmosphere. Indeed, JP Delacamera had a nice remark: "Looks like you two would like to be on the field."

So bring it on, SuperClasico. There will be a return match at the Home Depot Center in mid-July before Goldenballs returns to MLS. Another chance to see a good rivalry. Not much soccer yesterday but plenty of grit and emotion. In the end, when it comes to clasicos, all bets are off.
Posted by R. Mera Velásquez at 3:31 PM