Attendance has been poor so far this season (week 3). So where did everybody go? Away with Becks to Milan? Seattle and Toronto? To claim their stimulus check? Call it what you want, people are not showing up to games. Maybe it's the weather, March madness, economy or a combination, or is it that we really actually do need Beckham to fill stadiums in MLS--especially those that cater to 18,000 fans or so?

Other attendance hogs, LA and DCU are lagging far behind their usual score (27K for LAG and 20K for DCU last year in terms of medians). This year DC is looking more like a team from the West at around 14K. LA is barely above 17K. I'm willing to step back and say that it's the economy, the weather and the lack of buzz around most teams in the league. Even that one's a stretch, though. RSL has had many fans this off-season coupled with a brand new Rio Tinto Stadium. 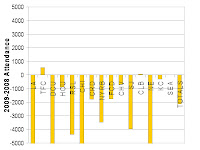 Maybe once the winter blues cease things will be different. I sure hope it is not up to Mr. Goldenballs to decide. Meantime a little comparison between mid-season last year 2008-2007 difference and this week's attendance 2009-2009 difference. 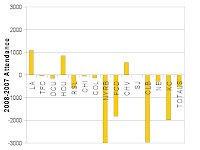 Yikes. Lets get some good weather and hopefully we'll see a jump, the weather has been absolutely brutal so far. I wonder if TV is up because of it?