I thought I might give some input in the matter. 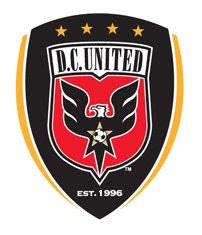 Recent events in the DC metro area have further reduced the team's chances of acquiring their own soccer-specific venue. At one point, DCU officials and MLS had announced of a 27,000 seat, state of the art stadium within the district at Poplar Point. That deal never materialized due in part to the economy but also to the ridiculously expensive Nationals stadium.

A ray of light quickly appeared in the form of Prince George's county in Maryland. Great expectations were present with this new venture, including jerseys for the county officials and other paraphernalia. Recently, however, that also came to an end. DCU was left to search for a new location, and in this uncertain economy, it becomes an even more saddening uphill battle. I, for one, would wait it out another year or so to give the economy a little more time to recover. The team, however, needs to stay in DC.

And it is precisely this that brings me to my next point. Commissioner Don Garber has mentioned in the past week that the team's future in the city is in danger. Why so? Stadium infrastructure is incredibly expensive and prevents the team from making any sort of profit. The team's considerable fan base notwithstanding, this doesn't seem too far fetched. Teams move in this country all the time. How many football teams has LA had? How many more basketball teams have moved around and resurfaced? 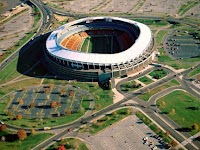 And yet, through it all, this league needs DC United. No other team in MLS, aside from Beckham's Galaxy, is as recognized as DCU. It has won the league on four occasions (twice as many as any other team), won international titles early on in the league's history, and it was home to some of the more important stars in this league: Ben Olsen, Marco Etcheverry, Jaime Moreno, Freddy Adu, Raul Diaz Arce, John Harkes. Truly an accomplished team. 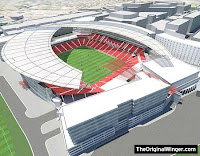 It's hard to imagine MLS without it's most important team. What's the EPL without Manchester United? What would happen to La Liga if Barcelona moved, if Real collapsed? What if Chivas left Guadalajara? Indeed, this needs to be seriously considered. The MLS is DCU and DCU is MLS. It's as simple as that. A couple of years of searching for a venue shouldn't be too much to ask. Saint Louis United? I hope not. Not at the stake of DCU.
Posted by R. Mera Velásquez at 2:56 PM

They seemed to be the Yankees of American professional soccer in those early years with Etcheverry and Harkes. They played some brilliant soccer and let everyone know the league was here to stay. Just give them the Nationals stadium since they don't appear to be using it for anything that could be called baseball.