Champions League: Lots of stars, too much defense 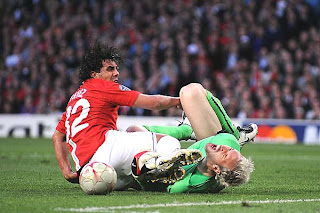 You hear it all the time. High kicking, low scoring and ties ties ties. Actually, that's a quote from the Simpsons making fun of soccer. But is it that far off? Not by looking at this past week's results it isn't. Barcelona, the wonder of soccer in the 2008-2009 European season with Messi, Iniesta, Henry, Eto'o, Puyol, Marquez, Hleb and company against Roman Abromovich's Chelsea of the EPL with their Ballacks, Lampards, Drogbas, Essiens and company. Awesome, right? Wrong. Chelsea applied the 1966 England defense and Barca could not get through with clarity. And the other semifinal match? Manchester United versus Arsenal? More of the same. Man U had nice chances early on in the match but the second half relegated them to a few long range shots from Ronaldo, Carrick and Giggs. And the only goal? Scored by a defender--John O'Shea.

Next week should seal the finalists that will meet in Rome on May 27th. Look for Pep Guardiola's team to try to light it up with a loose attack, leaving spaces open in the back line. Also, Puyol and Marquez are out for Barca and this will make their defense more interesting for the next match. No Arshavin (Zenit problem) and no Van Persie for Arsenal means Adebayor must pull off the upset once again at the Emirates. All in all, the stars that stood out for me were Giggs, Cristiano Ronaldo, Tevez and Rooney for Man U and Essien and Petr Cech for Chelsea. You can make the case for Henry in Braca but the rest--including Messi and Eto'o--looked quite muted to me. Fabregas was also quite frustrated against Man U and someone else on that team needs to step up and provide better service for Adebayor and Eduardo. Vela should be considered as well.

So who will it be? It's looking like another Man U vs Chelsea all over again. Guus, take some notes.
Posted by R. Mera Velásquez at 8:08 PM

I thought the Arsenal keeper was standout - the way Man U played the first half it could have easily been three or four nil. Arsenal was totally outclassed in the first matchup and only a number of excellent saves kept them in the tie.