Barcelona: A lesson in being number 1 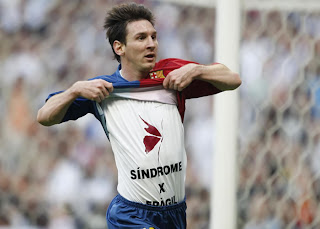 Barcelona 6 - Real Madrid 2. No, it's not a typo. And yes, this line has echoed throughout Planet Football for the past 18 hours or so. And why not? Six goals from the best collection of players available. Yes, Chelsea prevented Barca from opening play and took down their offensive qualities. But the game against Real Madrid was different. The "merengues" needed a win to cut their points difference from Barcelona from 4 to 1. It was not to be.

Messi showed his quality once again and why Maradona refers to him as the only player to come close to his abilities during his prime in the 1980s. Henry showed why he's one of the world's most perfect strikers. There are no balls and no plays too difficult for him to turn into goals. If in doubt, just look at the 4th goal of the game. 10 yards or so away from the area, touches it slightly against an ill-advised advancement from Casillas and somehow his touch enters the goal.

And what about Real? Clearly not the team they were hoping to be. Robben, Sergio Ramos and Raul were insistent but their chances were outnumber by a factor of three by the "azulgrana." Robinho is sorely missed, as is (insert fake cough here) Beckham. A move for Cristiano Ronaldo next season? Either that or a move for a top playmaker and a couple of extra strikers would help as well.

Cheers, Barcelona. Stamford Bridge will be a harsh task. No Puyol and no Marquez will make things interesting. Barcelona is a better attacking team but Chelsea has order in the back line and great holding midfielders. Still, Manchester United versus Barcelona in Rome would be the ultimate clash of the titans.
Posted by R. Mera Velásquez at 1:02 PM

They are really going to miss the first class defending skill of Puyol. Chelsea 2-1.