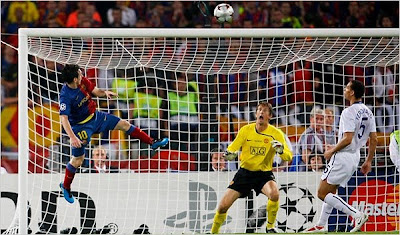 Copa del Rey, Spanish La Liga, and the UEFA Champions League. Barcelona downed the post powerful and highly decorated English side, Manchester United in a final fit for kings. It started with an impressive Manchester United with Park and Rooney on the wings and a brilliant Cristiano Ronaldo that only lacked in the luck department. Indeed, it could have been 3 goals for the Red Devils in the first 10 minutes. It was not to be.

Enter Eto'o, the brilliant Cameroon ace that has so often dazzled us with his play and impeccable finish. A twist around Ferdinand and Vidic and a near-post shot that Van der Saar will shudder at when he replays the game (if he ever does). After that it was 90% Barcelona. What happened to the stout Man U defense and the leaky back line of Barcelona that was missing Marquez and Abidal? Toure's shift out of midfield and the Silvinho-Pique tandem seemed to work quite well. Puyol had his career night, period.

On top of all these positives we also have the master (young master) Lionel Messi. What sublime touches and spectacular millimetric passes. And his goal in the 70th... perfect. A lobbed header past an outplayed Van der Saar. Keep in mind that the Argentine isn't terribly tall either. He leaned back in the middle of the air and cushioned it slightly with his forehead giving it just enough momentum to arch its way over the dutch keeper.

And what went wrong with Manchester United? 4-3-3 was too offensive for them without enough goal scorers. Putting Park so high up was a gamble, as was giving Ronaldo the center forward spot with Rooney on the left. Andersson was absent, Giggs muted and Park ineffective. Starting the game with Tevez instead of Park, dropping Ronaldo to the center midfield may have been better against an inspired Barca defense. Added to this was Puyol and Pique's frequent incursions into the Man U side of the pitch. I only wish Puyol could have scored just to round out the best performance of his life.

So cheers to you, Barcelona. May Catalunia party tonight and reign for another year as the continent's (and the world's) best club team.