You can now follow me on Twiter. I'm not really sure what that means but I thought it might be worth noting. MLS games have been sort of scrambled the past couple of weeks due to midweek play. That messes up my analysis and it takes me a little while to collate everything so that it makes sense on a "weekly" basis. On that note, I wanted to update everyone on what's been happening with fans at stadiums. Where on the one hand you have expansion teams (Philly, Vancouver) selling out seats ahead of their respective start dates (2010 and 2011), on the other hand we have classic teams like Dallas trying everything to bring fans to games.

Indeed, a recent game day deal included free stuff and other considerations. Seattle, meanwhile, has expanded their MLS capacity from 27700 to 32000. This tinkers with my relative attendance analysis but I'm trying to coalesce the two seamlessly so that it works. So what do these very different turn of events mean? Either a honeymoon phase with Seattle or a reluctance of having a poor team in Dallas. Go figure. FCD has to do something soon or they risk losing their franchise. Their one advantage over other markets? Pizza Hut Park. Yes, the "Hoops" have their own home. 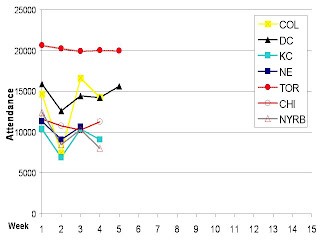 I also wanted to show a time series of the eastern conference attendance. After an early fall out during their second week of play, most markets have stabilized and/or recovered. Case in point, look at the defending champs, Columbus, bounce back to ~15K. Chicago's low attendance also bothers me, as does New York's fan base. Red Bull Park could become another Pizza Hut Park next year if the NYRB ownership team doesn't try something new. Otherwise, let's play with the names... Have some pizza with your red bull drink.
Posted by R. Mera Velásquez at 1:33 PM

You mentioned that Dallas is performing poorly on the pitch as well - how well does success there correlate with attendance? Obviously the two new teams should be considered anomalies since as you said they are in a honeymoon period.

I think it has a lot to do with it because Dallas is a relatively weak market in terms of natural soccer history and support.

As for the attendance leveling... I honestly think the weather has a lot to do with it. I think hundreds didn't show up early on in the season because of the crappy spring we have had in a lot of places.

Agreed. It's sad that they decided to place a team there, I guess. I'm going to write something up about Dallas to hopefully get some attention on the matter to my readers.