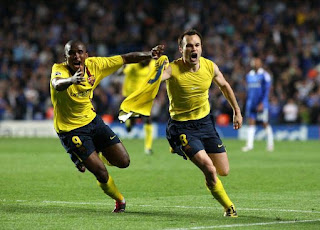 Improbable. Unrealistic. Not to be. Those were Tommy Smyth's words as time wound down for Barcelona in their crucial semifinal match with Chelsea at Stamford Bridge. But champions should never be underestimated. Yes, there was no Puyol, Marquez and Henry and yes, they were down a man when they should not have been. Barca still played like they had eleven men on the pitch. Chelsea wasted their chances and when they thought it was all set and done, Iniesta throws a cold bucket of water on their dreams of reaching Rome in two weeks' time.

Last Saturday's 6-2 victory over bitter rivals Real Madrid was no fluke. Even though Essien, Alex and Terry gobbled up Messi's inventiveness and Xavi's incursions into the area, the true colors of this loaded team would show brighter than ever. The referee made 3 or 4 serious errors (hilariously enough, the man happens to be a psychologist too). These errors were quite costly for Chelsea since they could have been penalties. On the other hand, his dismissal of Abidal was completely unfounded since the Frenchman did not touch Drogba (Anelka?) and the Chelsea man took an impressive dive.

What's next? A depleted but resilient Barcelona against the all-around best team in the world--Manchester United. A tall order? Perhaps. Keep in mind that 3/4 of their starting defense will be missing due to suspension/injury: Marquez, Puyol and Abidal. For Man U, Fletcher will miss the match. Pep Guardiola is set to have a tough match against United but Sir Alex Ferguson's team tends to leave open spaces in the back. Messi and Henry thrive in those situations. In the end, this was the best possible final we could have asked for except maybe for the weakened Barca defense. Can't wait for the 27th!

Poor Chelsea, held arguably the best offense on the planet for 180 plus and it was not enough.