Mexico's Conmebol woes: What it means to the USSF and MLS 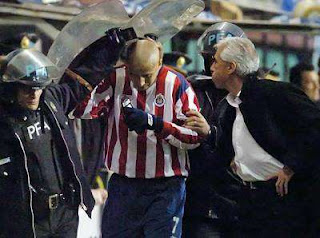 I think we have all pretty much heard the news. Mexico gets the swine flu. Other countries close their doors and quarantine people that have been in Mexico or are Mexican. Competitions and other activities within Mexico shut down due to the outbreak, and delays occur for international fixtures for both Conmebol and Concacaf competitions. It started with delaying Chivas and San Luis's matches with Sao Paulo and Ncaional of Uruguay. No one wanted to play on Mexican soil. Colombia denied permission to have Mexican home fixtures on their territory. The matches were reinstated and were scheduled again for the Mexican teams.... And the Conmebol teams refused to play on Mexico.

What followed was both sad and understandable at the same time. Mexico pulled out of the Libertadores and subsequently of all Conmebol competitions. This includes the Sudamericana and Copa America. It is a sad fact that the competitiveness and financial considerations of Mexican presence in these tournaments will be lost. But Mexican teams and fans have long squabbled with South American dignitaries about the lack of sportsmanship, match fixing and general discontent of Conmebol teams against Mexican teams. Such was the case with "el Bofo" Bautista in a Boca Juniors incident as well as not allowing Mexican referees until this season.

But what is the general context of this ordeal for the US? I think it's a great opportunity to jump into competition with South America that so many fans and commentators have clamored for. let MLS teams play the Libertadores and Sudamericana. Can this happen? Will this happen? Why not? There will be a vacuum there for the time being and US teams could take it up on a temporary basis until ties are reinstated between Mexico and Conmebol. After that maybe MLS will continue in the competition. I think USSF and MLS officials should jump into this conversation and take advantage of an unfortunate event. My condolences to the Mexican Federation and I hope they can reconcile with South America soon. This is a ridiculous turn of events that some epidemiologists I've spoken with have scoffed at.
Posted by R. Mera Velásquez at 1:21 PM