4th week. Same numbers. Sort of. RSL attendance slumps, as does the defending champs', Columbus. Rio Tinto Stadium's beautiful facade is, regrettably, visible. The yellow bleachers at Crew stadium glare in the afternoon sun. San Jose was respectable considering the small size of Buck Shaw Stadium (10,500 seats). The Galaxy was actually able to attract over 23,000 to the Home Depot Center for its derby against Chivas.

Elsewhere, Toronto and Seattle had sold out stadiums. I've read how many players in MLS teams are looking forward to playing at Qwest field. Why not? Lots of fans and incredible atmosphere. It's also been rumored that the Sounders are hoping to expand MLS seating beyond its current 27,700 capacity. It's starting to get warmer out there and college hoops are closed for the season. Time to see our MLS supporters in the stands, right? Well, with DC's stadium problems at the top of the list and increasing amounts of expansion teams (Philly, Vancouver, Portland), it's only getting more complicated. It's not so far-fetched to see DC losing its franchise to, say, Saint Louis. 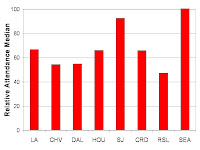 More emphasis should be placed on regaining those ardent crowds that have made teams like DC so strong on and off the field. Come on, MLS, show the fans some love, give them some guidance and a reason to attend games. TFC and the Sounders responded with great squads and acquisitions and they look good on the pitch too. Plenty of season left. 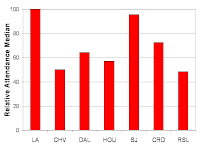