Another week. Another disappointing look at attendance. Does Beckham actually make that much of a difference? I prefer going to full stadiums to get the full atmosphere. Estadio Capwell, Monumental de Guayaquil, Bank of America Stadium in Charlotte, Turner Field in Atlanta, RFK Stadium, Ben Hill Griffin Stadium in Florida, Carter Finley Stadium. All glorious when full. Empty and cavernous with no fans.

It's a shame to see beautiful, new soccer-only stadiums like Rio Tinto and Dick's Sporting Goods Park so empty. It seems like any shot during the game catches empty sections of seats. Dallas looks terrible, not on the pitch, but on the stands. It's no secret that many players in the league are itching to play in Seattle and Toronto. Why not? People show up. People are loud. It injects spirit into the players. How should the league and/or teams address this? Square one if you're Dallas/Colorado/RSL. Build your fan base and nurture it. That's the key. One or two expensive stars can only do so much. 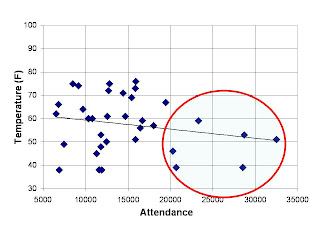 Many of us MLSers out there wonder... Why aren't people coming out? No Beckham? Economy? Lack of buzz about teams? Weather? At least one of those is actionable. As a climate scientist I wanted to look at the relationship between weather and attendance. Maybe a factor for 10-20% of fans? More? Not in Toronto or Seattle. Plot 1 on the right shows all games in terms of both attendance and temperature. Not much of a trend. 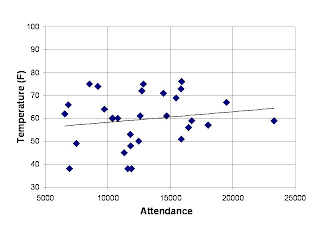 Maybe a tendency towards cooler temperatures? Right. Remove (both cold) Seattle and Toronto (circled) and you get the second plot (left). Trending towards warmer weather? Sure. Very noisy. Not much to look at. Maybe a look at relative attendance - weather next week.
Posted by R. Mera Velásquez at 11:38 PM

It might be the economy, but MLS tickets are the cheapest to come by, and the NHL average attendance actually rose in the second half of the year.

I'd contribute it to some cold, and maybe because it really isn't summer yet, but something is wrong thus far.

What is wrong is that they put the games so far away from where I live!

If they'd acknowledged reality and put teams in parts of the country that traditionally supported soccer, there'd be fewer Anschutz sponsored disasters and more genuine fans. KC and Colorado ought to be relocated.