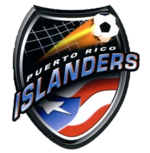 The Puerto Rico Islanders came through with a 2-0 victory. I admit I wasn't very positive on the possibilities that the lone non-Mexican team in the Concacaf Champions League would have. Not against mighty Cruz Azul. Mighty? Apparently not. Tonight, a hard-fought win by the USL team has put it that much closer to a spot in the Concachampions final and a spot in this year's Club World Cup. Granted, they still must face their Mexican counterparts in the return leg at Estadio Azul. I had heard some rumblings about the "cementeros" not living up to expectations and losing to lowly CD America--yes, to those of you unfamiliar with the Mexican league, the team is owned by a cement company--. Indeed, Galindo's team may not be a true test for a feisty USL squad that has surpassed all expectations.

This brings me to another conclusion. How is it that two so-called second-tier teams are able to make it so far in a continental tournament? Well, you can thank the Concacaf chiefs for that. No other football confederation allows for a non-league team to advance into official continental competitions. UEFA Cup and Sudamericana certainly don't follow this scheme. But where would you get representatives from Canada aside from Toronto or the Caribbean aside from Jamaica and Trinidad and Tobago? Clearly something got lost in translation. Even America's own representatives, which were all MLS in the first installment of the tournament, can have a USL side. That's right, the winner of the US Open Cup can go through to the Concachampions.

So let's say that Charleston beats DC in last year's Open Cup. That would mean that the US would get the Revs, Chivas and Houston along with Charleston. Ridiculous? Yes, sadly. This is the same as saying Barnsley goes through to the UEFA Champions League or Cup, or Municipal Canar goes through to the Libertadores or Sudamericana.

I understand that there is a good deal of PR (pardon the pun) going on here. No one in Concacaf wants to be left out if they have legitimate teams. But then again, what does that say about the rest of the leagues in this conference? Is the Concacaf really that much worse than the AFC (Asia) or CAF (Africa)? Or, let's try another sport--Asheville tourists in the World Series. . . I'm all about being fair to everyone but there are lines that should be clearly defined. In the meantime, how about that USL?! I love my Railhawks and I'm pulling for the Islanders all the way! Maybe it is true, USL isn't a lower division--it is an alternative league to MLS.
Posted by R. Mera Velásquez at 10:43 PM