End of the affair: Bradley fired as US coach 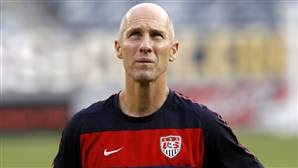 Bob Bradley was fired as coach of the US national soccer team today. When the referee called full time at the 2011 Concacaf Gold Cup with the Mexico team up 4-2 on the United States, some of us out there thought his days were numbered. But nothing happened. Days passed and international friendlies were announced (versus Mexico on the 10th), Copa America started and the US ladies made it to the final.

But today was different. A day after the thrashing of the MLS All-Stars at the hands of Manchester United, a symphony of news flashes gave us word that US Soccer had severed ties with Bob Bradley. But why not sooner? Time for searching and hiring a new man for the job? And yes, it seems they have Bradley's successor already with a "further announcement" on Friday.

Let's reflect a bit on today's events. What were the pros and cons of Bob Bradley? To start, his record was 43-25-13, winning a Gold Cup title, finishing in second place at the Confederations Cup and in the final 16 at the World Cup after winning the group over England. Also to his credit: the blossoming of Donovan and Dempsey, solidification of Michael Bradley, Onyewu, Howard and Bocanegra, and the addition of game-changers like Altidore, Agudelo, Jermaine Jones, Bedoya and Timmy Chandler. All in all, quite the resume.

Conversely, the national team has become quite stale after the World Cup and a 5-4-4 record this year. There is no inventiveness on the pitch and his tactics have been eviscerated by opposing squads. Do credit Mexico on their win, however. Their "golden generation" has come to life and, somehow, a run at the World Cup semifinals in 2014 isn't out of the question.

But back to Bradley. In reality, second term coaches (1 term being a world cup cycle) never quite do well in their reprisal as managers of national teams. A national soccer team is a completely different animal from club competition in soccer and, for that matter, other sports. There are only limited times in which you have your players each year and individuals that are central to the national team may not be playing at all for their club sides. Just the length of time alone does away with continuity. There's no "rebuilding season" or even "relegation battle." Other examples abound: Bruce Arena (2003-2006, early exit from 2006), Marcelo Lippi (Italian champions in 2006, eliminated in group stage in 2010), Sven Goran Erickson (English team became stale and lost flair in 2006).

So it's a new beginning for US Soccer. Who will be our coach? Juergen Klinsmann? Guus Hiddink? Sigi Schmid? Jason Kreis? Carlo Ancelotti? Marcelo Lippi? Claudio Reyna? All good candidates but my preference is a foreign coach right now. Someone that understands the larger scale of things. Jason Kreis is food for thought but I'd like him to have a few more titles and seasons with Real Salt Lake. Right now is too soon for the international arena. Collegiate experience, such as Arena had as a coach in college soccer, can only take us so far since a vast majority of our players are now in world-renowned teams and leagues. Arena and Bradley took this style of coaching to its very limit and with pleasant results. But a new line of thinking is needed.

So, we bid you adieu, Coach Bradley. You made us proud and made us believe. You brought us exhilaration, consolation and fantasy. We thank you for your hard work and we know you'll succeed wherever you go. No hard feelings either. Sometimes you just have to say "time's up."
Posted by R. Mera Velásquez at 6:57 PM