Messi's not enough: Argentina crashes out of Copa America 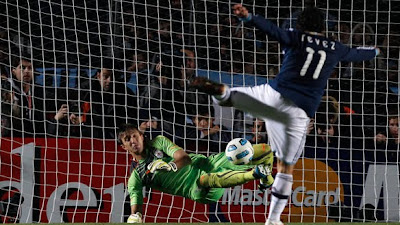 If Messi was to finally break through with the Argentine national team and solidify his place as the true heir of Diego Maradona, he will have to wait a bit longer. Argentina was stopped flat today by an Uruguayan side that never let up. In the end, it was ultimately Muslera that gave Uruguay the win, even though it had to be through the penalty spot.

Things looked difficult for Argentina from the start. Uruguay attacked with conviction and defended with man-marking to such an extent that the first yellow was given to Perez within the first 5 minutes. He would score in a nice follow-up to a great header thanks to a perfectly-placed Diego Forlan free kick.

Argentina rebounded. Fast and secure. It would be another magical play by "la pulga" Messi to serve Higuain for a solid header past Muslera. But then the Uruguay defense woke up. And when it comes to defenses in South America only Paraguay can claim to top them. It's also true that Uruguay can be very physical and this serves to break up the short-pass plays of Messi, Mascherano, Di Maria and Aguero.

But there were several missed opportunities. Mostly in the overtime. And at least one that Messi should have put away. He knew it when he crashed onto the grass with his face down in partial psychological agony.

The penalty shootout would be about Muslera once more. He had come up with wondrous saves and this wore down on the Argentine kick takers. Messi wouldn't fail but Pastore and Tevez weren't resolute in their chances. For Pastore, the ball miraculously bounced in. For Tevez, Muslera guessed correctly and sent Uruguay to the semifinals.

Now it is obvious that this Argentine side lacks the defense to stop players with significant talent. This is clearly evident when one of your starters, Gabriel Milito, doesn't see the pitch as much with his club team--Barcelona. Is Messi really enough for Argentina? Maybe the team requires more than just Di Maria. Clearly there is a lack of depth in the attacking midfield to complement Messi's considerable talent. In Barcelona he has Iniesta, Xavi, Busquets. Mascherano, Gago and Pastore don't quite measure up. So yes, Messi's not enough for Argentina. And until they build a structure around him, he won't have the international success that Diego Armando Maradona enjoyed.
Posted by R. Mera Velásquez at 10:38 PM