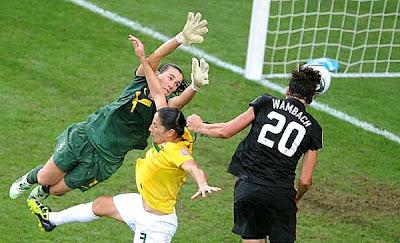 Somehow the USA can't script their soccer better. Last year it was Donovan's goal in stoppage time at the men's World Cup. This year it was Abby Wambach in the 122nd of overtime to tie the match against Brazil to send it into penalties.

It was poetic justice in so many levels today. The score was opened in the third minute by Diana in an unfortunate own goal for the Brazilians. She would miss her penalty later.

Poetic justice because of fraudulent calls that gave away Brazil's goals and yet the USA still won the game. Having looked at the replay, the American Rachel Buehler went for the ball and contact with Marta was incidental in a close call that could have gone either way. It was the tying penalty for Brazil. Hope Solo saved the first shot but the play was disallowed because an American player ran into the 18-yard box before the penalty was taken. Marta put away the second kick.

Poetic justice for the fighting spirit against both Brazilians and bad refereeing. Marta's second goal (a beauty, by the way) came out of a play that should have been called back due to an obvious offside. Later on Erika would fake an injury and this added 3 extra minutes. These extra minutes allowed for Rapinoe's pinpoint center and Wambach's wondrous header to send the game to penalties.

It was poetic justice for the fans as well. The ESPN crew with Julie Foudy and Brandy Chastain screamed along with Ian Darke's call when Wambach scored the tying goal. Us fans throughout the world and at the stadium had been yelling at the screen for all the missed calls. But our disappointments were erased by the teamwork that USA players are known for. The stadium never gave up. The players put their hearts on the field. Their spirits never crumbled. And at the end, when things had gone so wrong, they believed in themselves and poetic justice was served.