No Rueda: Ecuador struggles in the Copa America 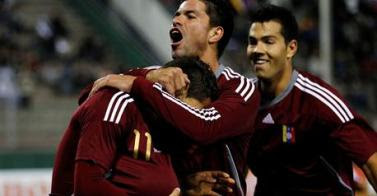 This is supposed to be the new Ecuador. A mix of young talent and the old vanguard. Speed and experience. But they have fallen short. Again. There's a saying in Ecuador: "jugamos como nunca pero perdimos como simpre." Which means "we played our best but lost like always." It's a stigma from the days before the 2002 World Cup qualification. A soccer nation with potential but disappointment. Should it still be like this?

Today's loss to Venezuela was more of the same. Lack of finishing touch, lax defense and missing players, most notably Antonio Valencia. The Manchester United stalwart was injured in the 0-0 tie with Paraguay and couldn't take part in today's match. But there are a few interesting names left off this team completely: Jefferson Montero, Fernando Guerrero and Joffre Guerron. These are young players, yes, but they play for important teams and are capable of special things with the ball at their feet. It's difficult to watch a match in which Christian Benitez has to come back for the ball and where Walter Ayovi has to play defense and be the creative force behind the team.

There is a certain new paternity that Venezuela has on Ecuador. Venezuela? Really? Yes. Twice they beat Ecuador in the 2010 qualifiers. Just one of those matches cost the qualification as Ecuador was behind Uruguay by just a solitary point at the end.

So is Reinaldo Rueda to blame? Ecuafutbol? The players? Possibly the first two. This is a talented squad that only needs a little nudging in the right direction to reclaim its place in the top five of South America. But right now the ball isn't rolling. And that's what Reinaldo Rueda's last name means: rolling. Can Ecuador beat Brazil? The Cariocas have tied twice already in this tournament. I find it hard to believe they will do so again. Until then, Ecuadorians will keep dreaming about the magic of 2002 and 2006 with no clear way forward. Not yet.
Posted by R. Mera Velásquez at 9:40 PM