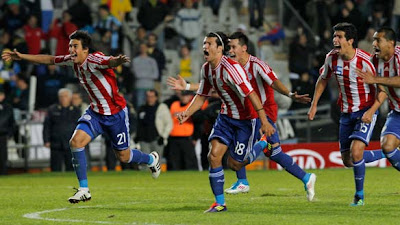 No Argentina in the semifinals due to a penalty kick decision versus Uruguay. Okay. It happens. It's Uruguay, the 4th place team from the 2010 World Cup. Colombia gets upset in the quarterfinals by Peru. Big surprise but, again, it happens. But Chile loses to Venezuela? And Brazil exits prematurely in penalty kicks against Paraguay? Okay, now we're onto something.

Craziness. Plain and simple. But give credit to the "smaller nations" of South America. Peru has been in the sidelines for decades. It's about time they rekindle their 1970s form. Then there is Venezuela. The country heavily favors baseball over any other sport. Same goes for the US, but this is South America, football continent. And yet, if you look at the different players in this Venezuela side you come across names like Cichero (Newell's, Argentina), Arango (B. Moenchengladbach, German Bundesliga), Vizcarrondo (Once Caldas, Colombia), Giancarlo Maldonado (Atlante, Mexico). These are quality players in good leagues. They are bound to have good fortune in international tournaments.

The question then becomes: is parity that much closer in South America? Do big teams like Argentina and Brazil still exist? The answer is yes and no. Yes, because these teams have stars like Messi, Robinho, Neymar, Huguain. No, because their winning formula can no longer be intimidation due to name. Bolivia will find a way to close spaces on Messi if they man-mark him. Argentina becomes just another team with big stars. Brazil can have goal leads in their games erased by poor goalkeeping and spotty defending in a tournament that they feel they already own. Not anymore. Big names in the defense don't mean much if the players don't confront a game in a professional manner. This is true international football. The opposing squads no longer fear the "big teams" because they have their own "big players." It's a new kind of mano-a-mano.

And what of Chile? Once Argentina and Brazil went down, many of us out there thought this might be Chile's tournament to win. But the Suazo - Sanchez tandem couldn't score more than 1 goal on Venezuela. And the "vinotinto" found a way to score two. Just like that.

It's wide open now. Even though critics like Andres Cantor may feel the current top 4 in South America aren't worthy candidates to the title, it's clear to say the he, along with most of us in soccer world, have been taught a lesson. Respect. Plain and simple.
Posted by R. Mera Velásquez at 11:20 PM