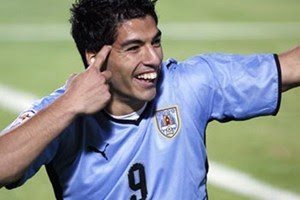 An unlikely final, perhaps. Uruguay and Paraguay would decide where the South American crown would go today. Uruguay won it with style, grit, passion and golazos. When the score is 3-0 you know something special happened.

For Uruguay it was Luis Suarez, perhaps one of the best forwards in the world, that really won the tournament for them. Behind him is Diego Forlan, a classy player and top scorer at last summer's World Cup in South Africa. This tandem, coupled with players like Lugano and Perez and with a solid goalkeeper in Muslera, comprised the most complete team in the 2011 Copa America.

The match was thoroughly controlled by Uruguay from start to finish. A near miss in the first 5 minutes where a Paraguayan handled the ball on the goal line brought back memories of Luis Suarez's game-saving handball against Ghana in last year's World Cup. But Suares is a different person now. His speed, agility and soccer intelligence brought the first goal after he unmarked himself from the defender and sent a shot past Villar. He also had a hand (a head, actually) in setting up Diego Forlan's final goal with a superb pass.

This final was also Diego Forlan's return to the big stage. And he did so in style. Two goals to finish Paraguay and give Uruguay its 15th Copa America title. Forlan was a master in midfield today and his goals came with power (first) and simple placement (second).

The always physical Uruguay defense had a similar foe today in Paraguay (South America's Italy). Perez again showed his knowledge of the defense to break up plays and intimidate the opponent. Arevalo and Caceres were pivotal in their roles and, along with Lugano, prevented Paraguay from settling into a rhythm.

Congratulations, Uruguay. You deserved the Copa America today. You also showed us that South America isn't just about Argentina and Brazil, Messi and Robinho, Neymar and Huguain. Uruguay made the semifinals of the World Cup 2010 for a reason and today they showed why they are the top team in Conmebol. Let's not forget that they won the first World Cup in 1930 and defeated Brazil in 1950. Somehow, the feeling of another "Maracanazo" is quite palpable. They already beat Argentina at their Copa America. Right now, with the way they are playing, this Uruguay team could top Brazil in 2014.
Posted by R. Mera Velásquez at 5:06 PM