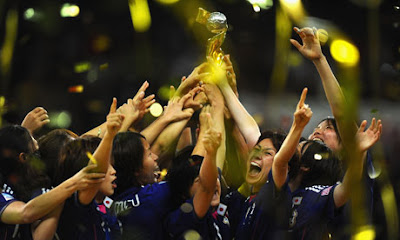 Meant to be. Not meant to be. Those were the shades of fate today at the 2011 FIFA Women's World Cup. Heartbreak. Emotion. Redemption. Japan walked out as world champions for the first time, and deservedly so.

Not meant to be for the US soccer team. The chances came and went throughout the first half. What could have been a score of 2-0 ended up tied scoreless. Alex Morgan's goal midway through the second half was almost enough. But not today.

Not meant to be for the defense today. Alex Krieger and Buehler didn't compact themselves enough and their casual clearance of an impressive Japanese attack was what gave way to the tying tally.

Not meant to be for Abby Wambach. She tried and pushed and got the go-ahead goal in the second period of extra time. Header. Perfect. But not enough. Japan tied the score with 4 minutes to go thanks to a misplaced bounce off our star goalscorer. 2-2. Penalties.

Not meant to be for Hope Solo either. Our superb goalkeeper wasn't tested enough by Japan for most of the game. This would have an impact as the game wore on. A slight injury in the overtime occurred right before Japan's tying goal. Her usual resolve was tested in the penalties and today she let one slip past her that could have made things interesting. She's only 29. Expect her at the Olympics and at Canada 2015.

Meant to be for Japan. Yes, today you could sense it. They were the lovable underdogs with a special cause. It was hard to imagine how the world wouldn't be cheering for the "blue samurais" today. Their country has seen such pain and agony this year. And they dedicated their fighting spirit, their resolve, their goals, and their title to the nation they love. And we applaud them for it.

Congratulations, Japan. Today the world cheered with you. It was simply meant to be.
Posted by R. Mera Velásquez at 7:52 PM