Yes we can: USA advances to World Cup Final 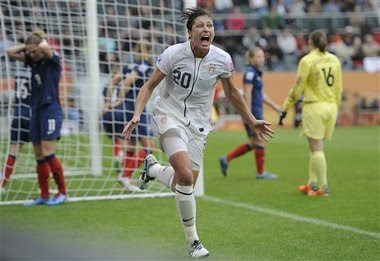 Courage. Resolve. Class. Teamwork. Relentlessness. The US women's national soccer team advanced into the Germany 2011 World Cup final with a thrilling victory over France. A precious gift to American soccer fans in such dire need of a victory. For the ladies, it is self-respect and recognition that they are one of the better sides in women's soccer.

Today it Cheney, Wambach and Morgan scoring. The old guard giving way to the new. Abby ruled the air as she so often does and scored the game-winner with style. Cheney started things off early, much like the Brazil game. But France pressed and eventually tied the score in the second half. After Wambach's score it was a little bit of magic from Rapinoe to Morgan. The youngster had a flash of genius and chipped the ball over the French goalkeeper.

For the second game in a row, Wambach showed us why she's the go-to player for clinching goals. Today their defense was stout with Krieger and Boxx. Hope Solo always an asserted general in the background. Rapinoe provided the second half spark that every supersub has to bring.

Up next is the enigmatic Japan. The Japanese have knocked off two soccer powers in Germany and Sweden. They have also lost two matches to the US in warm-up friendlies before the World Cup. But this is the final and they will be carrying the hearts of a nation that has seen so much pain in recent months. The key will be concentration and possession.

This is to thank the ladies for giving us a bit of fantasy with every play. Thanks to you, US Soccer is back in the final with a chance to win it all for the third time in history.

We believe.
Posted by R. Mera Velásquez at 9:01 PM