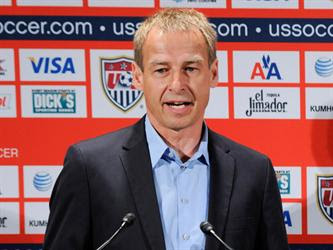 It's important to try to make sense of Klinsmann's team for the date with Gold Cup champions Mexico to be played next week (August 10th). This is mostly because it's his first try and against a worthy foe. He stayed true to the fact that mostly experienced players would be called up for this match. He also called up players recently ignored by Bob Bradley and gave a first call for one player: Bill Hamid (GK, DC United).

"Klinsi" is known for an athletic, attacking style with significant support for players. This will be interesting to see given the lack of depth and production from our forwards. In are Agudelo, Donovan, Adu and Buddle. Adu and Donovan double as attacking midfielders but he looks to set them up as forwards. Surprisingly, his "forward" category also includes Beasley, who has had a mix-bag of results in his short stint in Mexico (Puebla). Beasley is a natural winger so suiting up as a forward is an interesting change of pace. Agudelo is, currently, the future of the attack and Buddle may just bring what this team needs. Bradley used him only sparingly at the World Cup, choosing Gomez and Findley instead.

Aside from the reliable trio of defensive midfielders that is Edu-Bradley-Jones, Klinsmann also elected to bring back Beckerman (never quite settled in with the national team under Bradley). Another player with plenty to prove with a new manager is much-maligned Ricardo Clark (E. Frankfurt). The former-Dynamo player has settled in with his German team and has played well in the defense. He has had plenty of great moments (his goal versus Trinidad and Tobago in the qualifiers) and also flops (early yellow card in the round of 16 match versus Ghana at South Africa 2010). Finally there's Brek Shea. Mister "haircut" didn't have great showings with Bradley in a couple of friendlies last year but has looked phenomenal for Dallas during the 2011 season. Torres (Pachuca) makes a comeback after not playing with the national team at the Gold Cup.

The back line has a lot of old faces: Cherundolo, Goodson, Bocanegra, Ream, Pearce. No Lichaj (injury) or Spector (recently transferred). Look for a reliable back four to start the match and perhaps Pearce will get the nod at left back. It's also nice to have Timmy Chandler back in the team after showing such promise in friendlies versus Argentina and Paraguay. Michael Orozco Fiscal (San Luis) makes the team after 3 years since his one and only appearance with the national side. Edgar Castillo is another player called up by Klinsmann to break from the Bob Bradley norm. Castillo was recently reintroduced into Club America and has made a couple of appearances. He's a naturally left-footed player and could start at left back.

What's a probable starting lineup? It could look like this:

I could see Donovan and/or Beasley in the midfield instead of Torres/Shea. Adu-Agudelo at forward would be interesting also. Chandler could get the nod ahead of Cherundolo but I wouldn't bet on it yet. He will, however, be on the pitch at some point as a sub.