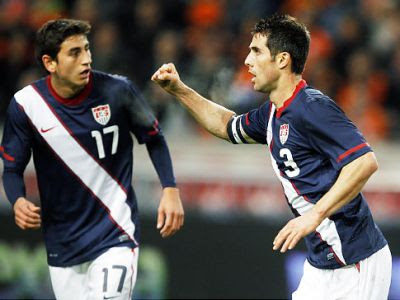 The Scottish Premier League team Glasgow rangers added two Americans during the summer transfer window: Alejandro Bedoya (Orebro) and Carlos Bocanegra (St Etienne). Rangers already has one American international: Maurice Edu. The Ibrox team has been the home of DaMarcus Beasley and Claudio Reyna in the past.

So what has caused this influx of American talent to the Scottish champions? A recent article indicates that the Rangers front office is seeking to broaden American appeal for the squad. Whether this will work remains to be seen. However, those of us following Americans abroad always have an eye on what's happening with the team. Adding Captain America Carlos Bocanegra could mean more interest in soccer media to air matches involving this squad.

There are some interesting undercurrents within the context of Rangers moves. For one, this team has shown a commitment to developing US players in a way that few other club teams in Europe have. Fulham, for example, is another squad that has hosted Americans (Keller, McBride, Bocanegra, Eddie Johnson, Clint Dempsey). This means recognition that there is significant quality in this country, enough to build a squad around. Let's not forget that many teams in Europe have Brazilian and Argentinean spines. Comparing Americans to those countries isn't necessarily fair, but it's becoming clear that our national team players are viable candidates.

The three Americans currently fielding for Rangers occupy different positions on the pitch: defensive midfielder (Edu), attacking midfielder/winger (Bedoya). and central/left back (Bocanegra). This is a testament to the continuing solidification of the defense and, especially, the midfield in this country. Players like Bradley, Donovan, Dempsey, Holden, Jermaine Jones and Edu are notable not just in this country but abroad as well. And even though Maurice Edu may be on his way out of Rangers, having two regular starters in a major European team speaks volumes for the evolution of the American soccer player. Mexican squads have also taken up this cause and have added Herculez Gomez, Jose Francisco Torres, DaMarcus Beasley and Jonathan Bornstein to their teams.

As the summer window closes, players like Edu, Bradley and Jones may move to more traditionally powerful teams. Bradley is reportedly attracting interest from Napoli (in Champions League) and Roma (eternal contender). Clint Dempsey might make a move at any point. His presence in the Premier League is solid already. As for Rangers, their outreach goes a step beyond the Scandinavian attraction towards US soccer players. The Ibrox team has significant pedigree and is looking more American every year. As our young players grow up and become stars, more and more European teams are paying attention to the widening pool of talent in this country.
Posted by R. Mera Velásquez at 1:50 PM