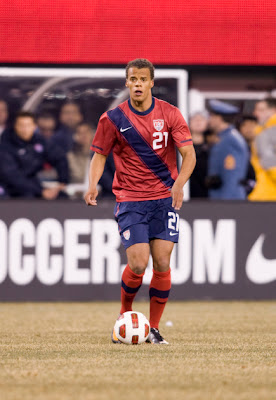 Much has been made of US national team player Timmy Chandler in the last few months. From his breakthrough games with the national side against Argentina and Paraguay, to his rise as a starter for Bundesliga side Nuremberg. But his relationship with US national team fans has been a bit rocky ever since those friendlies in March because of missed matches, tournaments, attention.

It started with the friendlies against the South American sides. Earlier this year we were introduced to the lad and watched him become a regular for his Bundesliga team. By mid-March, then-coach Bob Bradley selected him to represent the US in the exhibition matches. Fans had started to watch him closely in his games for Nuremberg and realized that he just might be the future of the right back position as Cherundolo is phased out.

Chandler was stellar against Argentina and provided a necessary spark out of the back and forced the team forward. Agudelo would eventually tie the match. Against Paraguay, Chandler was even more explosive and a bright spot in an otherwise flat game for the Americans.

Flash forward to the 2011 Gold Cup and many fans and soccer media were pinning Chandler as a starter if Cherundolo was hurt or even at midfield for mid-game changes in tactics. He also excelled at that position versus Paraguay. But then came word that Chandler was "exhausted" after his first full season with the Bundesliga team and that he needed some time off to recuperate. Really? Plenty of other players relish the possibility of being called up for the national team regardless of the length and demands of a full season. And this was an international tournament.

Was Nuremberg at fault for not releasing him? Bob Bradley wasn't strict enough to mandate his presence? Did Chandler want to represent Germany instead?

So on Friday, a day after he was called by Klinsmann to appear next week versus Mexico, Nuremberg and Chandler asked for him to remain in Germany and skip this match due to a "slight injury." But when he surfaced as a starter and had a great game for Nuremberg for the first game of the season, fans scratched their heads and were generally irate on twitter and other media. Some respected soccer journalists also posted the news that he was starting for Nuremberg but not willing to play for the US. "Hmmm," was the common denominator among journalists. Indeed.

Another snub by Chandler. Was he really not planning to suit up for Team USA ever again? Not necessarily. Washington Post's Soccer Insider posted an interesting article on the situation. It seems that Chandler is looking to secure his place as a starter during this month before he heads out to national team duties. His "slight injury" was a misnomer by US Soccer and Klinsmann had not talked with Chandler prior to his naming as a player in the 22-man roster for next week's friendly. According to the article, "Chandler and Hecking [his manager] committed to both U.S. friendlies next month: against Costa Rica Sept. 2 in Carson, Calif., and four days later against Belgium in Brussels."

So, I along with most US soccer fans out there will reserve judgement for now. Our team could certainly use Chandler's energy and skills as a new World Cup cycle approaches. He's a friend for now but people will certainly question his commitment further if he doesn't suit up for the national team within the next few matches.
Posted by R. Mera Velásquez at 3:51 PM