Fabian Johnson and the German connection 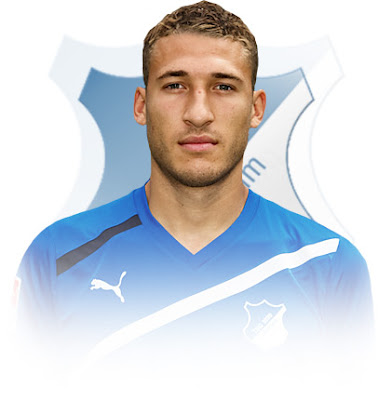 Photo credit: Liga Insider
The last three years have seen a new breed of American soccer player in the US national men's team: German-born Americans. Chandler, Jones, Johnson are all obvious American (Anglo-Saxon) names. In this case we are talking about Timothy, Jermaine and Fabian. They happen to all play for the German Bundesliga (first division) in established teams: Nurmenberg (Chandler), Shalcke 04 (Jones) and Hoffenheim (Johnson). The latter has been invited to the upcoming international friendlies against Costa Rica (Sept. 2) and Belgium (Sept. 6).

This German connection comes full circle with the recently-appointed US coach Juergen Klinsmann. The players are the sons of servicemen that were, at some point, stationed in Germany, and whose mothers are German natives. Such is the case of Jones and Chandler and also the legendary Thomas Dooley. These players represented Germany in their youth squads but ultimately decided to play for the senior US team since they didn't suit up for the European team in an official tournament, per FIFA rules.

The recent inclusion of these players has payed high dividends for the Americans. Jermaine Jones (age 29) was able to use his considerable talent with Champions League background to muscle the United States into the Concacaf Gold Cup final. He has replaced Ricardo Clark and Maurice Edu in the central holding midfield role alongside Michael Bradley. Jones scored one goal for the US in the Gold Cup (later deemed an own goal by the Jamaican defender). His play has been limited recently due to an uncertain club future and he didn't have a good match in the friendly versus Mexico earlier this month.

Timothy Chandler has had a love/hate relationship, mainly with the fans, after having an impressive debut against Argentina in a friendly in March as well as a second game versus Paraguay. His speed and ball skills made him a fan-favorite to play backup to Steve Cherundolo or provide a change of pace as a winger. His absence during the Gold Cup (recovery after first season in Bundesliga) and the Mexico friendly (desire to play for a starting spot with Nurmberg) caused many fans to question his allegiance. Subsequent communication with him and his club coach confirmed that he still wanted to play for the USA and that he would suit up during the September friendlies.

Now comes Fabian Johnson, recently transferred from Wolfsburg to Hoffenheim and having an impressive start with his new squad. It was just days ago that www.soccerbyives.net first posted that Johnson was interested in representing the US. Now we will have a chance to watch him to see where he fits in the crowded midfield of the US national team. It should be noted, however, that he can double up as an outside back.

Klinsmann has chosen to continue his search for "latin" talent in the form of Mexican-Americans (Orozco Fiscal, Edgar Castillo, J.F. Torres) but he is also looking at this new resource to bolster a squad that had become quite stagnant under Bob Bradley. Do give credit to Bradley for calling up Jones and Chandler, we should acknowledge he started this German connection.

As we near the upcoming friendlies, there are two missing pieces not of German descent: George John (centerback, recently signed by Blackburn of the EPL) and breakout Mexican-American Joe Corona. Both have chances to play for other national teams: Greece and Mexico, respectively. But there is only limited room in the US squad and marquee friendlies call for the best the team has to offer. More international matches are coming in October and later this year. For now, at least, the German connection is up and running.
Posted by R. Mera Velásquez at 5:08 PM