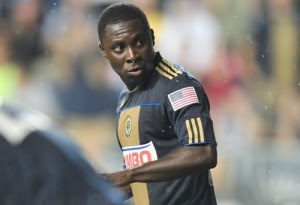 Freddy Adu made headlines in the American soccer media last when he rejoined MLS and suited up for the Philadelphia Union over the weekend. There was a general applause as the "prodigal son" returned to the stage that saw him rise as a promising young star. This week comes word that Eddie Johnson might also join the league. Things turned sour, however, for "EJ" and now his future in the American league is in peril.

But what does a return to MLS mean to our young soccer stars? For Adu it's a chance to rekindle his talents, which as we saw at the Gold Cup, are just as impressive as US fans had hoped. Adu's insertion into the Union lineup gives coach Nowak significant freedom as far as player combinations and formations. Nowak's team can function in any number of 4-4-2 (diamond or flat) or even in an attacking-minded 4-3-3 with Adu as a withdrawn forward.

Adu has been requested by many fans to rejoin the league mostly because we are all aware of his talents and because the European market grew more and more concerned about his performance. Benfica worked great for the first few months but he soon became surplus. A loan to Monaco meant almost no playing time since the coach saw him only as a fringe player. The same happened with Belenenses. Adu seemed to have found a home at Aris Salonika of Greece but financial troubles meant his loan could not be extended or taken up as a transfer. Freddy finally realized that playing time was more important and Rizespor of the Turkish second division gave him what he needed.

In twitter conversations a few years back I realized how important Adu could be for the game in the United States. He was a "failed star" to the media and critics. Too young to appreciate the game and his talents. Perhaps it was true. But he also had the ability to "run at the defense" and not "run around the defense" like our other prodigy--Donovan--does. Jamie Trecker made this observation.

In MLS, Adu has the freedom to play his way but under the tutelage and boundaries determined by Piotr Nowak, his first professional coach. And let's face it, Donovan also had trouble playing in Europe when he was a young up-and-coming star with the national team. Now Landon is known worldwide and a bone fide star. Adu can do the same by keeping his head cool and focusing on the game. He might one day return to Europe as Donovan did.

There were a couple of other names this season and last that returned from Europe to play in MLS. Jay DeMerrit had his time in the old continent and did the most with it. Benny Feilhaber, a mainstay with Bob Bradley, also saw his time in Europe come to an abrupt end when his team was relegated. He has had a quiet but active time with New England this season.

There have also been a few snubs towards MLS. DaMarcus Beasley, for one, chose to join the Mexican Primera instead of his home country. Games are still more competitive there due to the history of each team and the established style of play. How do we take this? I say it's just a player looking to do something different in a new league. I don't think it "makes MLS look bad" that he chooses not to play in the United States.

The latest MLS returnee, Eddie Johnson, was set to undergo the league allocation utilized to evenly distribute national team players throughout the various teams. Many fans [and media] were glad to see another special player return to America. Johnson played only sparingly for Fulham (owner of his rights) and had stints at Cardiff City and Aris Salonika. But just today it was revealed that no deal had been reached, perhaps due to his requested salary, and that he would ultimately not join the league. What does this mean for the league? Potentially the loss of another talented American. For Johnson it may mean fighting for minutes in Europe unless the team he joins makes him a starter.

It is increasingly visible that MLS is becoming a great option not just for experienced players but also for former American stars in the league. Stars like Adu and Feilhaber are able to further develop by playing their trade in an increasingly more competitive domestic league. For Adu, his age and talent increases his chances of one day playing in a big team. But is this necessary? Players like Donovan have proven it's not necessary to leave MLS to become American soccer stars.
Posted by R. Mera Velásquez at 1:47 PM