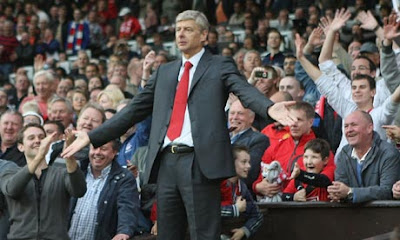 Wow. Those were surely the words worldwide today as we looked at the scoreboard: 8-2 in favor of Manchester United. No, this wasn't Derby County they were playing. It wasn't even Bolton or West Ham. It was Arsenal. Yes, the former champions and one of the best teams in the world throughout the last decade.

This loss was just as much about luck as it was about the general state of the iconic London team. Ordinarily, most shots are either saved or off target. Today they were on target and past the helpless goalkeeper. Defenders were off their lines in offside traps and in free kicks. Wenger watched in silence as his team broke apart at the seams and had no answer.

And that's the other main problem with Arsenal. How do you answer a team like Manchester United when you have given up talented players in the last two years? No more Adebayor, Nasri or Fabregas. No one coming up the ranks and no new marquee signings so far. In a world where finding game-changing players is necessary and where most notable players elect to go to Chelsea, Man U, Barcelona and Real Madrid, it becomes that much harder to compete for top spots. The team loses concentration when its main constituents have been eroded away. That's what happened today: lack of concentration.

Wenger will have to search deep within the pool of available strong players in the world. Most have already been signed by the larger teams. Otherwise, a serious change will need to be made with this team either in management or player development. If there is no Arsenal and no Liverpool (much better with Suarez this year), then the English Premier League becomes a two-team tournament. And how sad that is.
Posted by R. Mera Velásquez at 1:32 PM

Are the two teams Man U and Man City? Whats happened to my Arsenal is sad. I think they've put to much faith in Wilshire to pick up for Fabregas, and Nasri is one of the more underrated wing players in the world right now. They can forget about UCL play next year.