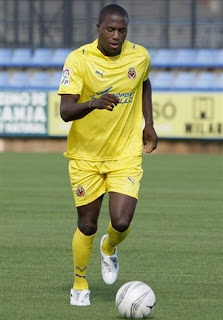 Jozy Altidore went to Villarreal (second only to Real Madrid in Spain's La Liga last season and currently unbeaten in the Champions League including a game tied at Old Trafford against Man U) and saw only a second half against Depor earlier in the season. Freddy Adu escaped the Benfica reserves to join France's modest side Monaco only to be used as a last minute substitute. Michael Bradley is fighting for a spot on the German Bundesliga's Borussia Mönchengladbach. Eddie Johnson has fallen out of favor with soccer as a whole and thusly became relegated to English Championship side Cardiff City. He has yet to score a goal for the second division team, much less start. Bryan Arguez has not dressed for Hertha Berlin in God knows how long. Added to these are a long list of national team regulars that include Dempsey, Convey and Pearse that have struggled for a spot in their respective European clubs. So what's wrong? Lack of confidence? Stage fright? Coaches? Whatever it is, it needs to stop. The players must be active with their teams (as lowly as the team may be) in order for them to be at top form. This is especially true realizing that our direct rivals south of the border have impressive players in Europe that are seeing significant playing time, including Omar Bravo and Andres Guardado of Deportivo and Carlos Vela of Arsenal. I would venture to suggest that Jozy be loaned to a more modest European team that will see him get more time on the pitch and get more accustomed to the style of play. Even so, the game he did play in showed his abilities and only nearly missed a couple of shots. What a shift in events could have occurred if those shots had found the back of the net. Well, there's my rant. And I'm not alone: Ives Galarcep of ESPN and Steve Goff of the Washington Post are also very concerned. Let's hope the winds shift soon enough. In the meantime I will rejoin you for another MLS stats post and then for my experiences at DC next week when the US plays Cuba for the world cup qualifying.
Posted by R. Mera Velásquez at 4:52 PM

Bring them back to America!