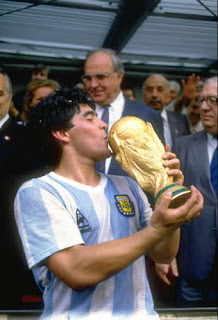 Just yesterday the soccer world was shocked (good/bad), even though it had been a possibility, to hear that Diego Armando Maradona would be the new coach of the Argentinian national team. "Diego," as he's simply known in most soccer-literate places is synonymous with soccer due to his personality, play, memories, and political views. If Pele is the King of Football then, Argentinians argue, Maradona is God. I'm torn here because I grew up watching Diego completely tear it up in 1986 (hand of God and best goal ever in the 2-1 game against England in the quarterfinals), then saw him cry at Argentina's loss to Andreas Brehme's questionable penalty in the Italia 1990 World Cup final against Germany, and fall from grace in 1994 after scoring against Greece while subsequently testing positive for doping. I was also in vigil when his life was threatened due to substance abuse and other health problems 2 years ago. Further, his political stance annoys me (pro Castro and Chavez, no to the US).
I question the wisdom of his appointment as a coach, however, since he has no real previous experience. Given his past history this will either be an amazing run for Argentina and further proof of his status as a sports deity or a catastrophic fall from grace far greater than Hugo Sanchez's for Mexico's Olympic qualifying in 2008 or even Diego's own failure in 1994. Still, I'll cheer him and Argentina on (except in fixtures against Ecuador or those that might affect its fight for a place in 2010).
Cheers, Diego. And may the force be with you.

Unfortunately for Diego, most great players have gone on to become terrible coaches. Perhaps the best basketball player of all time, Bill Russell, had a lackluster coaching career with the Seattle Supersonics and Sacramento Kings. Ted Williams, the last baseball player to hit .400, was equally wretched his three years managing with the Texas Rangers. NFL Hall of Fame QB Norm Van Brocklin went 56-100 in his opportunities with Minnesota and Atlanta. Obviously, Argentina is already an elite club and hopefully that will help Diego in having a greater degree of success.

Yes, agree on all counts. There's probably a reason why Pele never coached for real and why most star players prefer the role of a color commentator.

I think it may be hard for superstars to understand how unique they are as talents. Since the game comes so easily to them, they don't look at the run of play the same as the normal player.