A coach no more 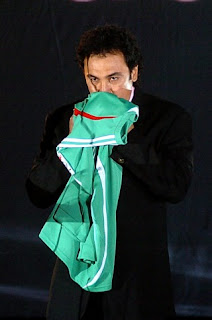 Okay, so I usually don't dwell on Mexican soccer but this being a blog that covers the state of the beautiful game around the world, I had to give my thoughts. As some of you faithful readers may know (as well as those from outside the Carolinas), the Mexican national team has had its share of debacles in the past 16 months: not beating the US team on US soil (duh), not winning the CONCACAF Gold Cup and thus not participating in 2009's Confederations Cup, and lately and more blatantly not making it to the Beijing Olympics this coming August. So who's to blame? Hugo Sanchez Marquez, some say, and today their word was heard and the "Pentapichichi," and former Real Madrid player and arguably best Mexican player that ever graced the field, was no longer the coach of the Mexican national team. Did he deserve it? From my humble opinion, yes. Maybe he wasn't ready for the national stage or maybe he simply wasn't suited for that type of soccer coaching. Some in the business blame his demeanor towards the media and the players themselves for his eventual downfall. So what does make a good coach? Is it the medium (club, country), the niche (collegiate, professional), the support system? Look at the LA Galaxy. Now there's a team that not even the biggest signing in MLS history (Becks) nor the attacking prowess of the Donovan-Ruiz combo nor the "sexy football" signing of the legend Rudd Gullit as head coach can save. The team's downfall lies within its uppermost reaches; the fault lies with the general manager, one Alexi Lalas that at one point made the world turn their head to look at a US side that was able to contain the eventual champions Brazil to one goal in the round of 16. But this isn't the same Lalas. His message got lost in the fields and he and other officials in the team have succumbed to the other important(?) aspect of the game...money.
And such was the case with Hugo Sanchez as well. When it all boiled down this afternoon and the Mexican club team owners (the owners!!!) got together to decide the fate of the national team, it was the losses that an absence from the Olympics and the Confederations cup had incurred in the Televisa economy of the Mexican nation. They claimed that there could not be another catastrophe in which Mexico did not make it to the world cup, and to some extent they were correct. But let's rewind... they chose Sanchez as their man because of the economics involved (annoying car insurance ads with Hugo Sanchez aside) and they got rid of him because of it also. Sometimes in the learning curve we must fail before we learn and this applies to all sports. I don't like the way the media scapegoated Sanchez and branded him a short-circuited individual that "needs professional help." Where were you when he took Mexico to the quarter finals in 86 or on those illustrious years at The Real Madrid? The fault here lies with the management and to some extent with the players. Yes, I said the players. It's true--and I've stated it more than once now--that there is a current upswing in play in the CONCACAF, but in the end these are professional players in a marquee league, a league that spends the most cash in the Americas. At some point you have to wonder how the players can't be blamed just as much as the coach. My advise: choose younger players, give them a younger coach, and treat it as a separate entity. It's worked well in other countries and it should work well in a soccer-developed nation like Mexico. And as for the coaches? Well, Jesus Ramirez should get a shot for now. Let's have the coaches go through the entire process and grow up with their teams. It's worked elsewhere: Argentina (Peckerman), Domenech (France), Vizuete (Ecuador), Bradley (USA).
Posted by R. Mera Velásquez at 7:15 PM

That's a great picture - it makes the guy look like David Copperfield or something.