Sixto at the helm 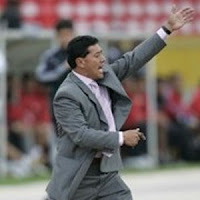 A little backtracking to my place of birth--Ecuador, that is. So, when we left the picture last year our then coach Luis Fernando Suarez had left the team further in the trenches by losing at home to the worst possible team in the conference--Venezuela-- and then going down by goleadas to Brazil and Paraguay. He should have gotten the picture after the Copa America when teams from around the region had figured out the Colombian's style of play and we saw nothing but failures, especially at the goalkeeping position. A quick exit a-la-Bolillo should have happened. In any case, we were left with no coach 3 days prior to the next WCQ match against arch rivals Peru. So who came to the rescue? By default, and with no other means, Chiriboga (president of FEF) resorted to the successful youth teams coach Sixto Vizuete. This happened only after repeatedly tempting former coach Hernan Dario "el Bolillo" Gomez that declined the offer due to a "serious divergence of thoughts" on his arrival. I personally feel that the large majority of Ecuador fans and a lot of the officials at the FEF felt the same way.
I feel that there is a serious lack of defensive play in the current team and the new generation isn't as solid as the previous one. Long are the days of De la Cruz, Hurtado, "la sombra" Espinoza, and Neicer Reasco. All of these players are currently still playing but their age, lack of participation in respective clubs, and lack of speed have mounted to exacerbate the current situation. Maybe this time around we may actually call on Jose Valencia from Willem II in Holland. Guagua is another player worth noting.
What Vizuete has been successful at doing is the development of younger players and he promises to inject some positive energy into the senior team as well as some young faces. There are a few non-believers out there but I think it's an Ecuadorean's turn to be at the helm of the national team. Some of the comments by a sector of the media arguing that the cycle of Colombian coaches might be over is well argued. At some point, players need to be injected with a new attitude and a new vision. This holds true for teams such as USA and England, where Arena's and Ericksson's cycles had to come to an end when they both came empty handed during the 2006 World Cup campaigns.
I have to admit that I don't have very high hopes of reaching 2010 this time around. I was pleasantly surprise with Ecuador's 2006 WCQ campaign as well as their appearance in Germany (Beckham kicked us out!). Maybe I'm wrong this time too ;) We're definitely off to a great start with Vizuete. Nothing's better than rolling over Peru 5-1.
Posted by R. Mera Velásquez at 12:34 PM

I hate Beckham almost as much as you hate Atlanta. For reasons not to hate Atlanta, check my newly minted post out.