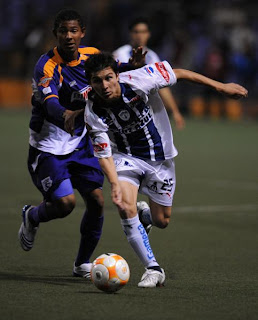 Yes, that's right. Pachuca's Jose Francisco Torres has elected to play for the United States instead of Mexico and will (might) feature in the upcoming qualifying games at RFK and then Port of Spain. This occurs after being insistently courted by both the US and Mexico for some time now.
Some facts: Torres was born in Texas but has Mexican descent. He decided to skip high school when a good opportunity to train and possibly play for a major Mexican league team (Pachuca) appeared. The 20-year-old has played 20 games for Pachuca scoring once. He also scored during the now defunct Concacaf Champion's Cup against none other than DC United.
So why's this important? Well, it comes on the heels of American-born Giusseppe Rossi's choice to play for Italy instead of the US. That's right, the same Rossi that has been lighting it up with Jozy Altidore's Villarreal as well as the Italians at the Olympics. Another target the US is after and may lose to Germany is Yugoslav-born but somehow American, Neven Subotic. This kid currently features for none other than Borussia Dortmund of the German Bundesliga, having played 4 games and scored 3 goals. Let's keep in mind that he also played in the US U-17 and U-20 teams and the University of South Florida. He's eligible to play for Bosnia (birth), Serbia (ethnicity), Germany (residency) and the US (citizenship). What a mess, right? Point is he hasn't made up his mind yet. Maybe Torres' choice (or dissention if you're Mexican and angry about it) will have some impact in Subotic's decision. The US is riddeled with Americanized players: Preki, Dooley, Adu, David Regis, Tab Ramos, Feilhaber, to name a few historic or still playing. Let's keep in mind that some of the current players are not American in direct descent. These include Onyewu, Reyna, Altidore, Kljestan, Orozco, to name a few. But then again, why are they not fully American if they weren't born here. This whole thing can be a bit silly at times.
What do I think? Well, in an age of nationalized-to-be-with-a-national-team mentality, I think it's perfectly fine to snag up as many players for the national team pool as you can. In the end it's all about the money and, to a lesser extent, the prestige in the world scene. Very few countries remain purists these days, and that includes Spain (Marcos Senna), Portugal (Deco), Italy (Camoranessi), Mexico (Vuoso), France (Trezeguet), Germany (Klose). There's no salary caps with national teams so why not have an all-star side? Of the countries I just mentioned and except for Klose, all those players are ether Brazilian or Argentinian originally. When it comes to soccer, the world is mostly Argentinian and the rest is Brazilian... but that's another blog.
Posted by R. Mera Velásquez at 6:20 PM

Any chance the fellow will play in the DC match?

Actually, yes... and they better. If he doesn't play in this game or the next one he's eligible again for Mexico.