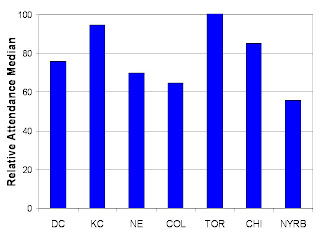 One more week after this and then more in depth analysis of the season as a whole with caveats about the playoff attendance numbers. It's a weird number to have, but 31 is the allotted number of games for every team (there are 14 teams in the league). Barring any last minute supercrowds at Columbus, New England, Dallas and Colorado, it's safe to bet that this year will fall short of last year's mark but only by about 100 seats (~1%). That's a minuscule amount in the grand scheme of things but certain places like Dallas have seen drops of more than 14%. My weekly difference of 2008 minus total 2007 shows the trends in a clearer manner (see yellow bar graph on right column). To counter that places like LA, Chicago and Houston have seen increases of up to 7%. We can only speculate how these numbers will change next season if Beckham doesn't return until mid-May. 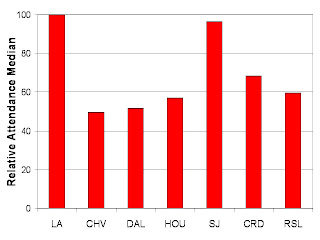 Finally, to synthesize some of the latest numbers in terms of my patented relative attendance, I've decided to post high resolution plots of the median relative attendance, i.e. how full the stadium was on any given matchday. In the east TFC rules the land at 100% for almost every match, KC follows due to its relatively small stadium, and DC and Chicago also show good numbers in the high 70s and 80s. The Red Bulls below 60% is a bit troubling. Let's see how these numbers hold up when the new stadium opens.
For the west LA tops it with most matches as sell-outs, plus San Jose's small stadium. Some surprising numbers include that for Colorado at more than 60% as well as a recovering RSL at 60%. Numbers tend to be smaller in the west for whatever reason.
I will rejoin you with the last installment of MLS attendance stats. Please click on the ads and help support the website ;)
Posted by R. Mera Velásquez at 12:52 AM

Do I need to turn off my ad blocker when I visit?