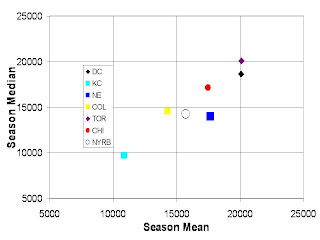 Back again after a brief respite. Probably will join you next week as the season winds down. There's only 3 more weeks of play after this week. I'm including the mean vs media plot to show some of the more recent happenings in league attendance. DCU was boosted by its last game at home, and they can forget about any further play until next season unless something miraculous happens. No more DP (Gallardo) this season. The guy played okay so no fuss with him, people. He wasn't a complete mess like Denilson. More important is my current focus on Dallas.

The team has very legitimate chances of advancing to the post-season since only 5 points separates them from the Goats and there are 9 points to be had still. 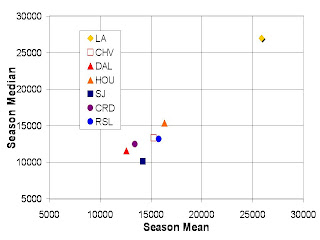 They have one more home game against TFC and somehow I doubt they'll have more than 40% of seats full at the Pizza Place they call their stadium. It's sad since they also boast one of the league's top scorers and potential national team star Kenny Cooper (Bradley has yet to name him to the squad and fans are upset). Cooper has 16 goals this season and is second only to record-breaking Landon Donovan (19). Clearly, something needs to be done at the big D if they want to both keep their franchise and/or earn respect. You'll note that they have the lowest mean and the lowest median. Both point to the same huge problem. But I just work with the numbers here people, as sad as some may look. I say bring in another DP player. Maybe a Mexican figure with stature or someone that people actually care about seeing.
Posted by R. Mera Velásquez at 12:16 AM

I think a DP would be a good idea, and especially a South American Star. Dallas is more than 35% Hispanic or Latino and I think that would boost attendance. Dallas is struggling compared to last year (attendance is down 15%), but in the larger scheme, attendance is still up 63% since 2003 and has risen every year since then excluding this year. So, I don't think things are as bad for Dallas as this years numbers may seem.