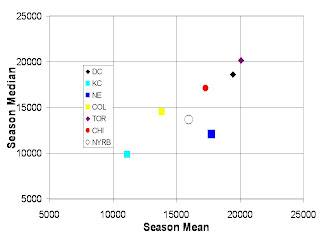 Back to business. Yes, data is a little dated (by a week). Expect another delay before the next installment of MLS attendance stats. For this week I wanted to have you pay close attention to New England's attendance. Notice that they have a higher than normal average (17.751) and also a good change from last year (+964). However, NE suffers from inconsistent attendance. Note that their median is 12,060 and that they've had 3 games less than 10,000. Columbus has enjoyed better attendance in the past few games due to their amazing form. I also leave you with a look at the mean vs median for the eastern conference. Except for NE and NYRB, most teams have pretty steady numbers by these standards.
Posted by R. Mera Velásquez at 8:27 PM

What do you think about the upcoming expansion of the European Championship to 24 teams?

UEFA has so many teams I think it makes sense, but there's a lot of backlash since it would mean half of the teams get in.