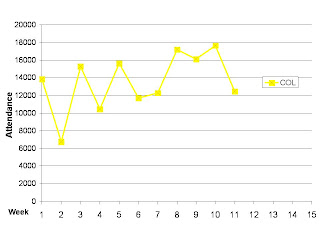 Sorry for the long skip in attendance info. I have a life too and there were several loose ends I had to tie up. I'm gonna make this one brief...
As we start looking towards World Cup qualifying not only in the CONCACAF but in CONMEBOL, UEFA and beyond some of the strain in attendance numbers may be felt as fans are notified that their favorite player will not be on the pitch. Then again, an electrifying performance by team USA in the semifinal round of CONCACAF may attract more attention to the national league. Also, let's keep in mind that that other football has taken to the fields as well and plenty of attention will go there as well, not to mention ugly lines on fields that should not be used for soccer. Added is the end of a long summer hiatus in the world's top leagues, i.e. England, Italy, Spain, Germany, and Co.
So what does this slew of factors mean for MLS attendance? From my humble numbers/analysis.... not much. Not yet, at least. Or maybe, just maybe MLS has finally found its niche and worry should be placed on the international status of the league (the Concachampions, salary caps, designated players).
One more point before I go... Columbus. Notoriously low in numbers for most of the season has shown great promise in the past few games as their great form has transcended onto the stands. The last 3 out of 4 home games have had numbers above 16K, and 2 of those, against KC and FCD weren't exactly against high-caliber oponents. I leave you with the Crew's individual numbers.
Posted by R. Mera Velásquez at 12:49 AM