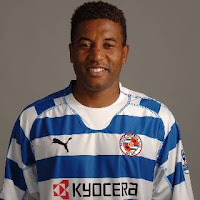 Since my buds over at mls-rumors have not yet posted this interesting news I thought I might give a little chronicle on the subject. It is true, not a rumor really, that Ecuador great Ulises de la Cruz is very interested in becoming part of the MLS family. More specifically, he intends to make a move to New York. Futbolecuador.com reported this morning that the former Aston Villa/Reading FC defender has been talking to NY's Juan Pablo Angel about the possibility of coming over to MLS. We must note that they were once teammates in Aston Villa during the pinnacle of their careers. De la Cruz was always a mainstay of the defense and provided several crucial goals and assists to allow Ecuador to reach the past two world cups. Most memorable, at least to myself, was the assist to Delgado in Quito when they were a goal down and a man down to Paraguay. Another important goal was one scored against Peru in the last round of qualifiers in Lima that gave Ecuador the 2-2 tie and continued their streak of dominating Peru in qualifiers (7 games and outscoring them 16-6). As I mentioned in the mls-rumors website, the team Ulises would probably go to is New York. This is a perfect fit since Angel is there and so is a large mass of Ecuadoreans that populate the New York City area. Also, De la Cruz would add considerable dimension to the team's defense and would compliment Osorio's game plan. On a personal note I would love to watch him play. New York is one of my favorite teams with the likes of Altidore and Angel and one I recently watched in action against the local Carolina Railhawks. Considering that Ulises is out of contract with the recently relegated Reading and that he's in the latter stages of his career, adding him to the MLS would be quite a bargain. Even though he's an aging chap, he has shown great skill during his stint with Reading, notching a couple of goals and gaining considerable praise from the British press. Check him out in action below:

Clearly there are enough Ecuadorians in the United States already. I am building a fence around my house to discourage more of these fiends from entering, although I told my fictional wife/blowup doll that it is supposed to keep the dog inside. More importantly, who ya got on in Wednesday's final? My Man U jersey is ironed and at the ready.

Man U is my pick, although I'd like to see Chelsea win to stick it on Mourinho's face. Maybe Abromovich wasn't completely wrong.