Here's a few figures that convey the current trends in the all-important MLS attendance. Toronto gets high marks, of course, with their die-hard fans that show up on week nights with sippy-cup beers and red and white streamers to throw at the opposition. San Jose and Kansas City have smaller stadiums suited to their smaller but loyal fanbases. New England, Columbus and New York are running really low despite a.)being number 2 in the nation (NE), b.)having an awesome team right now (CLB), and c.) being the capital of the world that easily fills Giants stadium when Barcelona or Beckham comes to mind. With that said, I believe everything is relative. Therefore, I have calculated and displayed the relative aspects of MLS attendance. I'll have more figures for you in the future that will also include the role of Becks and Co. in terms of attendance. I will permanently post attendance figures on the right column albeit at a coarser resolution.
In the meantime, some "star power" stats for you:
*Blanco's numbers are enhanced by the Earthquake's game being taken to McAfee Coliseum for the match. Lopez's attendance is higher in relative terms since KC's stadium is much smaller. Also worth noting is that Angel did not participate in 3 of the 5 matches NYRB has played so far this season. I figure that these stats will level off once the hype of the start of the season is over and Beckham has covered more arenas. 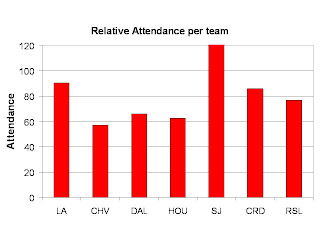 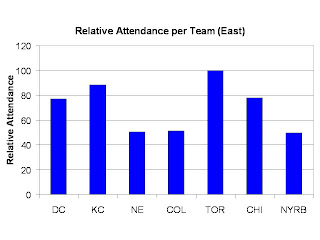 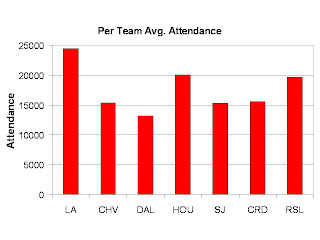 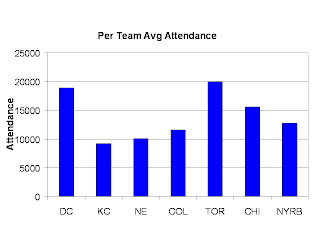