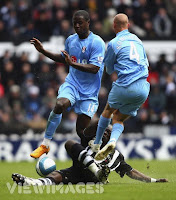 Fulham wins today. The all-American Premier League team is close to safety from relegation. Much has been said about this Premier League side and its American contingent. Whilst Clint Dempsey made a name for himself with 7 goals early this season and Brian McBride started scoring for him lately, winning crucial games for them in the process, other players such as MLS standout Eddie Johnson and US national team captain Carlos Bocanegra have been relegated to the bench and sometimes to the team reserves. How does this play out for the US national team? True, Bocanegra was still on the bench for all the recent Fulham games and this may, as some commentators have suggested, count as a strategic move by the Craven Cottage Coach. He just recently scored in a shocker win against Poland in Polish territory so I hope he can get back on track at the club level soon or his time as national team member/captain could be compromised. There has been serious speculation about EJ's recent performance both club-wise and in the national team. Some, like Ives Galarcep are worried that he could turn out to be another Clint Mathis and whither out of the picture. I hope not. EJ has good treatment of the ball and I think that with Fulham he showed pretty good skill but was somehow afraid to take more chances. As for Dempsey's future... he should have no problem finding a Premier League job if Fulham does indeed get relegated. McBride on the other hand should consider going back to the Crew, where a blue-collar fanbase is ready to refill the stands if they have their hero back.
Another side that could go down into the Coca-Cola Championship is Reading. I've seen them play and they are certainly lacking in the final touch and their defense is anything but stellar at the moment. It's too bad, because one of their players is once Ecuador great Ulises de la Cruz. He is getting old, however, so I can see why he's on the bench. Bobby Convey certainly hasn't looked anywhere near as good as when he played in the US. Recent national team play has also shown this downward trend in his play. As for the goalkeepers, Kelsey and Hahnemann might be headed to the MLS. Indeed, Hahnemann has stated more than once that he'd like to be in the expansion Seattle team next season. That would be great for the league and for them as well.
As for Derby County. Hopeless. I feel for their fans. Sometimes teams are just bad and need restructuring. Benny Feilhaber should try to find work elsewhere. He was seldom used in this team and has a bright future if we count his various appearances with the national team.
Posted by R. Mera Velásquez at 12:35 PM

I love the relegation system. I wish we could use it in American sport to get the lower level teams to compete harder. Instead, they are rewarded for failure with the first pick in the draft. We could get rid of owners who don't try to win. The Kansas City Royals and Pissburgh Pirates would certainly be likely contenders for a trip to AAA in the MLB.

I think at some point I'll have an editorial that compares relegation vs draft system. The draft system, in my humble mind at least, is just as flawed as the BCS. No relegation for the MLS for now, though.