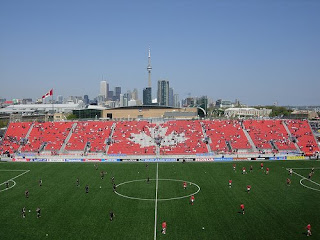 Potentially sad news for soccer [futbol] enthusiasts and full-time MLS fans. MLS-rumors is reporting that the CFL team Toronto Argonauts may be looking to move into the stadium and add 10,000 seats to the 20,000 already in place. Double-edge sword, right? For on the first hand, TFC would be able to increase its capacity to meet the overwhelming demand from their enviable fanbase. On the other hand we'd have yet another MLS team with the embarrassing and downright ugly football field lines. It's still sad to see football field lines during MLS games in some of the stadiums. For instance, RSL plays at Rice Eccles stadium until their stadium gets completed sometime in the summer or fall. It's not football season until the fall, correct? And why then are there lines and the letters "UTAH" in the goal areas? The guys on FSC's Fox Football Fone-in show spoke of the eyesore that was seeing a beautiful Beckham goal scored in a field akin to the NASL's pitches of the 70s and 80s. How does this look for the league when we know this is the one highlight that will be seen around the world? It undermines the integrity of the league and prevents it from being taken seriously by soccer fans from around the world. There's word that TFC fans may rise up against this move and there's hope still that it may not happen. Let's hope so. BMO is the crowning jewel of the league right now in terms of fans and atmosphere [click here for my commentary on it]. Let's not see it tarnished by taking a step in the wrong direction.
Posted by R. Mera Velásquez at 1:58 PM

I dastardly attempt to trick football fans into attending methinks.