Updating you with the latest attendance figures. The Beckham effect is beginning to be felt outside of Carson, CA with the Galaxy's goal show at Pizza Hut Park on Sunday (score was 5-1 with an Edson Buddle hat-trick). Pizza Hut Park (yes, I know that's a cheesy name... pun intended) overflowed its banks outside of its provisional 20,500 (I had been working with the 20,000 mark until now) spaces to fit a Beckham crowd of 22,331. That's still almost 2,000 extra spaces filled by the English international. With international FIFA dates pending in the next few weeks it's safe to be assured that some stadiums may not reach and/or overflow capacity when the Galaxians are in town. I'm sticking in another figure that I use to track the progression of MLS attendance throughout the season. It shows MLS attendance per team (western conference) with the different lines/colors representing the different teams. I have circled the two high attendance peaks corresponding to the Galaxy's visit to both RSL and FCD. Becks has been able to raise the attendance of these two teams by about 1/3. That's a significant number. On the plot you'll also see other times Beckham was present, as was the case with Colorado's opening day (also an overflow of the stadium by about 500 people) and the general attendance at the Home Depot Center (27,000). For a couple of those games attendance was lower than capacity but still healthy compared to pre-Becks Galaxy numbers. Later on I'll provide correlations and other statistical analyses. Blanco is another player that tends to attract fans to the stands (mostly Mexican fans). Can't blame them. For my money and on the field I have to pick Blanco over Beckham. I like both players equally but Blanco has had a better time with the MLS style so far and has been able to bring Chicago out of its slump ever since he joined the team mid-way through last season. As always, Stats are on the right column so scroll down to have a look and sorry for the resolution. 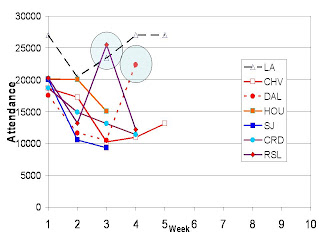